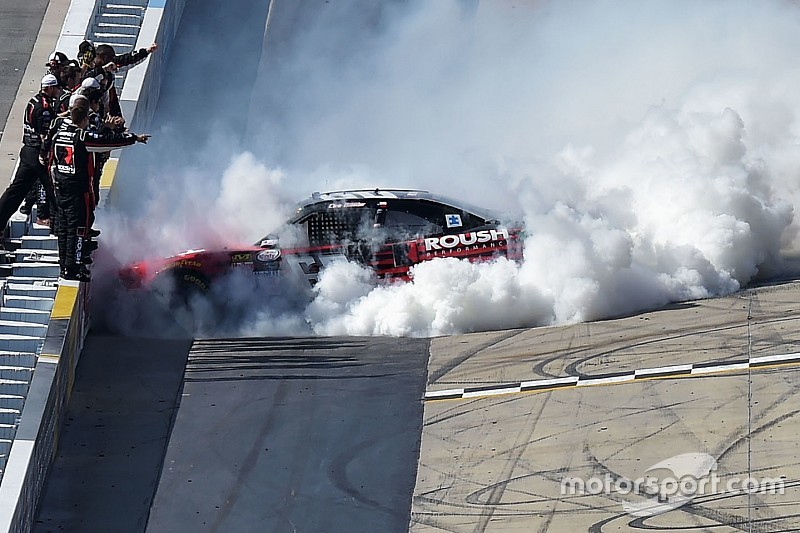 Teammates collided as Chris Buescher made a charge towards the checkered flag.

Chris Buescher claimed his second NASCAR Xfinity Series win in three races with his victory of the Buckle Up 200 presented by Click It or Ticket at Dover (Del.) International Speedway on Saturday. Matt Kenseth finished second, and Regan Smith was third.

"Great to get that second Xfinity win," Buescher said. "Can't believe how slow we had to run to be able to do it."

Chris Buescher made his final pit stop on lap 102 of the 200-lap race and ran the final 98 laps on a single tank of fuel, while most of his fellow competitors made green-flag stops in the final 20 laps.

Buescher's Roush Fenway Racing teammate Darrell Wallace Jr. also planned on utilizing the same strategy, and as a result, the RFR duo battled for the lead in the final laps. That battle got physical, as the two made contact multiple times racing for the top spot. Wallace had to abort the fuel conservation strategy when a tire rub from contact with Buescher resulted in a flat tire, necessitating a trip down pit road with six laps to go.

"It's my teammate, so I can't say much without seeing a replay," Wallace said right after the race. "I asked my spotter, and we just got ran over."

However, Buescher says that Wallace ran down on him.

Buescher took the lead when Kenseth gave up the top spot to be the first driver to head for pit road during the final green-flag run with 47 laps remaining. Kenseth had gotten off sequence early in the reace when he had to make an unscheduled stop for a loose wheel on lap 33.

"Our Reser's Fine Food Toyota was fast; that helps," Kenseth said of his recovery.

With his third-place finish, Regan Smith took the first $100,000 Xfinity Dash 4 Cash bonus of the year, finishing higher than the other three drivers eligible for the bonus at Dover -- Ty Dillon, Daniel Suarez and Wallace.

"That certainly takes that sting away from third," Smith said. "I thought we were racing for the win. I didn't think that 60 (Buescher) would be able to go all the way."