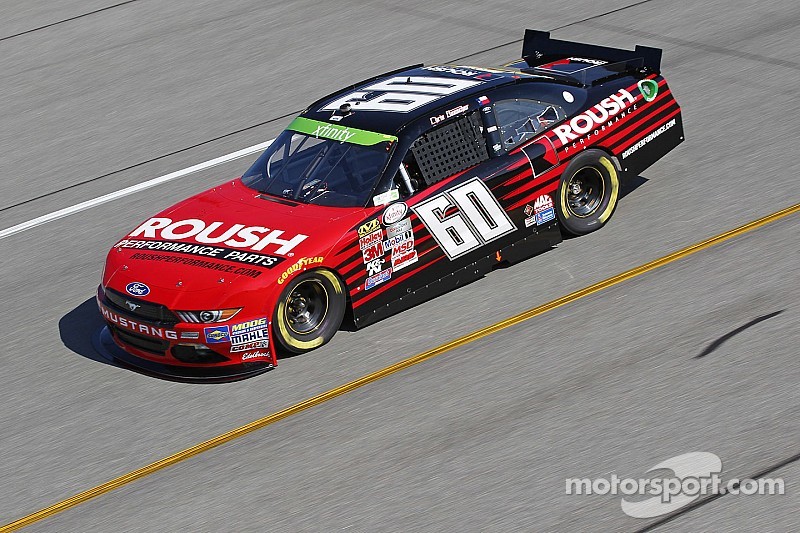 A green-white-checkered gave Chris Buescher the advantage he needed to take home the win in Iowa.

Iowa Speedway saw its first-ever green-white-checker restart attempt in NASCAR Xfinity Series competition at the track Sunday in the 3M 250. The final caution resulting in the overtime allowed most of the drivers one last pit stop for tires. Those four fresh tires carried Chris Buescher by Chase Ellliott in the final laps and on to the win.

"I was afraid that caution wasn't going to happen, but it did," Buescher's crew chief Scott Graves said. "I knew they (Elliott's No. 9 JR Motorsports team) didn't have tires, but we did. It just worked out for us."

"To finally get a win on an oval," Buescher, who claimed his first series win last year on the road course at Mid-Ohio, said. "This is amazing."

It can go both ways

Elliott was one of only two lead-lap drivers to stay out during the final caution of the race, the other being Buescher's Roush Fenway Racing teammate Ryan Reed. When the race restarted, Elliott was unable to hold off Buescher but was able to maintain second over the final two laps.

Erik Jones finished third after starting in the back in a car he didn't qualify or practice. Brian Scott finished fourth, and Ryan Blaney rounded out the top-five.

"Little disappointed," Scott said. "I thought our Shore Lodge Chevrolet was going to be better based on practice."

After Jones dropped to the back at the start for the driver change, Suarez took the lead at the green flag and led the first 48 laps before losing the spot to Buescher. Buescher and Elliott then combined most of the remaining laps of the race that was scheduled for a 250-lap distance.

Elliott took his first lead of the race on lap 67 and led 78 laps before Buescher got back to the front by being the first driver off pit road during a caution that came out on lap 144.

Blaney took the lead on a restart on lap 181 and led one lap before Buescher reassumed his position up front. It was under the preceding caution that came out on lap 177 that Elliott, among others, made his final pit stop of the race.

Dogfight at the front

Elliott was able to retake the lead from Buescher with 30 laps to go and stayed in front of him until the green-white-checker restart. In all, Elliott led 114 laps of the race that was extended to 259 laps. Buescher led 94.

"We were awesome today, and this Roush Performance Mustang was amazing," Buescher said. "We knew we were really good. We just had to hold on to it. I don't think we touched a wedge wrech all day."

The race was littered by nine cautions, including a yellow flag with about 100 laps to go when Brennan Poole intentionally got into J.J. Yeley soon after Poole returned to the track after and extended stay in the garage. The move was one of retaliation for an incident earlier in the race that initially sent Poole to the garage. After the contact with Yeley, Poole returned to the garage and was excorted by a NASCAR official to the Xfinity Series trailer.

Two crewmen injured on pit road during Talladega 'Big One'