Buescher's first race in a Nationwide car at AMS 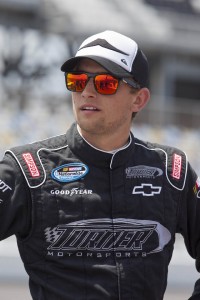 The NASCAR Nationwide Series (NNS) travels south to Atlanta Motor Speedway for this Friday night's NRA American Warrior 300. James Buescher returns to the seat of the No. 30 Chevrolet Impala for the first time since Chicagoland Speedway in July.

This will be Buescher's first race in a Nationwide car at the 1.5-mile Georgia track, but The Texan has two previous NASCAR Camping World Truck Series (NCWTS) starts at AMS, completing 100% of the scheduled laps in both of those events on his way to earning one top-10 and an average finish of 12th.

Atlanta Motor Speedway will be the first race in which Buescher and new No. 30 crew chief Mike Hillman Jr. team up. Hillman Jr. has been an accomplished crew chief in the NCWTS since 2005, calling the shots in 185 races and earning 19 wins, 81 top-five finishes, 107 top-10 finishes, eight poles and two championships (2006 and 2010, both with Todd Bodine) Hillman Jr. has been atop the box for two NNS races in 2012: Road America with Miguel Paludo and Bristol Motor Speedway with Nelson Piquet Jr.

This Week's Impala... The No. 30 team will unload chassis TMS-332 this weekend at Atlanta Motor Speedway. This is a brand-new Chevrolet Impala which will see its first track time on Saturday.

Buescher on this weekend's NNS race at Atlanta: "I'm really looking forward to getting back into a Nationwide car for the first time since Chicagoland in July. This will be my first Nationwide race at Atlanta, but I know from the races I've done in the Truck Series that it's a fast, wide-open racetrack.

It has a lot of grooves for two and three-wide racing. Tires wear out fast there, so there's a lot of slipping and sliding. It's a fun place to race in a truck and our team has been strong at the mile-and-a-half tracks, so I'm hoping to have a really good race."

Danica Patrick has no fear of AMS's fast track