Tony Stewart will be driving an orange and black Chevrolet this weekend, but it won't be his usual No. 20. Instead, the 2002 NASCAR Winston Cup Series champion will be driving the No. 8 Chevrolet for Chance 2 Motorsports in the Busch Series race at ...

Tony Stewart will be driving an orange and black Chevrolet this weekend, but it won't be his usual No. 20. Instead, the 2002 NASCAR Winston Cup Series champion will be driving the No. 8 Chevrolet for Chance 2 Motorsports in the Busch Series race at Michigan International Speedway on Saturday, Aug. 15. The entry is owned by Teresa Earnhardt and Dale Earnhardt Jr. Stewart and the Earnhardt's have partnered up for the one-race deal in the Cabela's 250 that will carry the names and faces of 3 Doors Down, one of the hottest bands in the country. 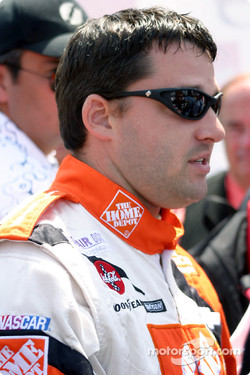 Tony Stewart.
Photo by Tony Johns.
Chance 2 Motorsports was founded by the Earnhardt's in the summer of 2002 to run a limited Busch schedule. The team also provides the opportunity for Dale Jr. to compete in the Busch Series and an avenue to showcase skills of up and coming drivers.

With four wins in only eight starts, Chance 2 has swept the three-restrictor plate races in 2003 with Dale Jr. behind the wheel. Tony Stewart joins Steve Park, Hank Parker Jr. and Martin Truex Jr. on the list of drivers who've all taken their turn wheeling the Chance 2 machine this season.

This isn't the first time Dale Jr. and Stewart have partnered for a project. Currently receiving air play on MTV and VH1, the two are featured in the 3 Doors Down music video "The Road I'm On." Filmed in Concord, N.C., it all started with a casual conversation and they next thing they knew, a deal was struck between two of the biggest names in NASCAR. The winning combination on the track became a winner on the airwaves. At Michigan, Stewart will be behind the wheel, Earnhardt Jr. on the pit box and 3 Doors Down on the car as they work their way to Victory Lane.

"Dale Earnhardt helped me out a lot in my rookie year, and I have always had a great respect for what he did for our sport," Stewart said. "Junior and I thought this would be fun. He wants to call the race from the pit box and I want to race one of his cars. He says's he'll be my boss for the day, and that should be very interesting. 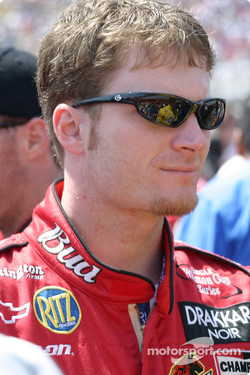 Dale Earnhardt Jr..
Photo by Tony Johns.
"Dale Jr. called me and asked me if I was interested to race the car. It sounded like a lot of fun and I've been watched the fun he's been having in his Busch car this year. That was my first reaction. The night he called me with the invitation, I got to thinking about all the types of cars I've driven in my career and the only two types of cars I haven't won in is a Busch Series car and a Sports Car. So, I think this would be a great opportunity to get my first Busch victory. At that point, it became an easy decision to hook up with Dale Jr. and Chance 2. I haven't seen the car or sat in it yet, but I know his crew chief and I have all the faith and know he has good equipment. I'm not worried, we'll go to Michigan and we'll be fine.

"Tony and I used to be rivals when we both raced in the Busch Series," Dale Jr. said. "Since then we've become good friends and I thought it would awesome if he drove for Chance 2 for one race. When we did the video with 3 Doors Down, both of us got to know the band and how much they enjoy NASCAR. We thought it would be cool for them to be on a Chance 2 car with Tony driving. And, I guess we're returning the favor to them for letting us show off our acting skills."

"Tony is a true racer, he will drive anything with wheels on it," said Kevin "Bono" Manion, crew chief. "He just wants to win. He reminds me of one of our car owners. I am very proud of our guys, we've worked hard but we're having a lot of fun doing it. They have put a lot of effort into every car we have run this year. Since we don't have many full-time guys, we have to work really hard to get ready for each race. The goal for the weekend is to repeat our pole and victory at Daytona."

Gragson, Hemric collide on pit road and then fight post-race

‘Unbelievable’: Josh Berry wins one for the short-track racers