It may have been the inaugural Mexico City NASCAR Busch Series event, but in the end, the road course specialists and hometown heroes couldn't beat the kid from New Jersey. Martin Truex, Jr. predicted Saturday that he was going to win the race, even ...

It may have been the inaugural Mexico City NASCAR Busch Series event, but in the end, the road course specialists and hometown heroes couldn't beat the kid from New Jersey. Martin Truex, Jr. predicted Saturday that he was going to win the race, even though everyone was playing down his team's chances. 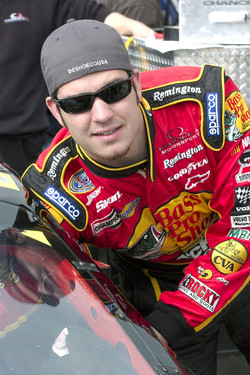 "I knew I had a strong car," said Truex. "I knew it was good on long runs and we were kind of counted out. There was a lot of guys that didn't think we could win it. It was awesome all day long, and the best it was all day was there at the end."

Truex didn't just win, he earned his victory, along with his Dale Earnhardt, Inc team, running a strategic race from the green flag at the start to the checker flag.

The No. 8 Bass Pro Shops Chevrolet Monte Carlo team grabbed their first win of 2005 with six seconds to spare. The DEI crew brought Truex in for an early stop for fuel and stuck to their plans even when Truex was down on the leader board. The strategy paid off when he passed legendary Mexican driver Adrian Fernandez to gain the lead of the event.

Truex ran the rest of the race unchallenged on his way to his seventh career victory. As Fernandez faltered behind Truex, Busch and Cup series regulars mounted a charge past the open-wheel star for positions. 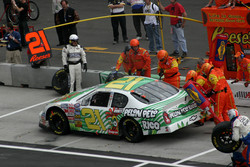 Pitstop for Kevin Harvick.
Photo by Luis Ramirez.
"We didn't need much," said Harvick. "This car was fast. All we needed was three chances there. Shoulda. Woulda. Coulda. Still a good day for us."

All of Edwards' earlier bad luck seemed to have gotten used up prior to race day. The Roush Racing No. 60 Charter Communications Ford Taurus driver wrecked his primary car in Friday practice and then blew an engine in the back-up ride. He managed to steer clear of trouble Sunday and score a third place result.

"Martin (Truex) did a great job, and all of the drivers did wonderfully today," said Edwards. "I'm really proud of my Charter team. To unload a backup car and to run third, that's a good championship effort and it doesn't get any better than that."

All in all local racers did not fare so well in the first points paying Busch series event held outside of the United States. As envisioned, pit stops provided challenging for those racers not used to the NASCAR way. No one learned that more than Pole sitter and hometown favorite Jorge Goeters.

He led much of the beginning of the event, but fell out of contention after a poor pit stop caused the team to loose valuable positions. Trouble mounted Goeters after his engine blew with 14 laps to go. He finished a disappointing 38th. 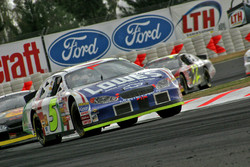 Adrian Fernandez.
Photo by Luis Ramirez.
Indy Racing League IndyCar co-team owner and former open-wheel race winner, Fernandez did a notable job for his first time in a stock car. He managed to claw his way to the front once on pit strategy, but just did not have the stockcar chomps to hold off the series regulars. He did wheel his way from 20th to 10th in the closing laps to earn his first top ten in a stockcar series. He was the best of the local racers and the only one to place in the top-19.

"It was a fantastic day," Fernandez exclaimed after the race. "I'm very happy. This was a car that didn't turn over a lap before the race because of the crash (in qualifying yesterday)."

"I'm so glad I finished the race," the former open-wheel ace continued. "There were so many things. Harvick passed me on one of the restarts on the left and there are so many rules to learn. I'm used to different rules. Pit lane speed limit is very difficult because we're used to having a button to control your speed. I really couldn't tell if I was good or not and they would ask me my speed and I wasn't sure."