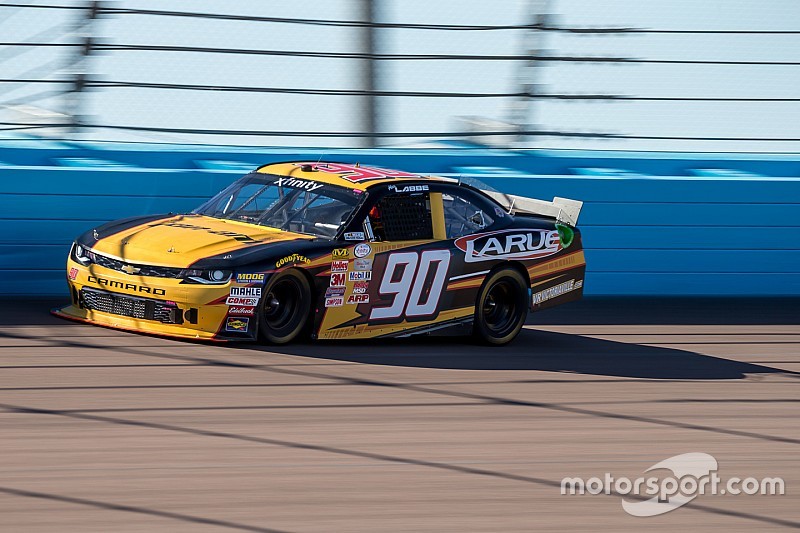 Labbé, who competed in the NASCAR Pinty’s Series this season, had prepared extensively for his first start in the Xfinity Series, using his track simulator extensively to shorten his learning time on track, and it paid off.

Things worked out well, as Alex told us after the second practice session on Friday that he was comfortable with the racing line after only five or six laps. During the race, he managed to avoid two major incidents that would have ruined his race. King Autosport and Crew Chief Mario Gosselin had prepared the GoFas Racing Can-Am/Kappa/Cyclop Gear/Équipement Larue Camaro that allowed Labbé to showcase his talent in no uncertain fashion.

After the second Friday session, Alex had told us that “I got the hang of the first corner pretty rapidly, but the last corner is much quicker and it took a few more laps to get quick enough to find some weaknesses in the car and work with Mario (Gosselin) to make the car better and quicker.

In the second Friday practice session, Alex got more comfortable in the car and started to push harder. He added that “The car was behaving really well towards the end of practice, so we decided to slap on four new tires and run some “qualifying” laps. I ended up 26th quickest on Friday, which made everyone on the team and all the partners who had made the trek down here very happy. I know that everyone will be quicker for (Saturday) qualifying, and we will analyze today’s results to make our car quicker for qualifying.”

The Xfinity Series qualifying rules do not allow teams to change settings on the car during the session. As Alex related, “The car was tight (pushing or under steering) in qualifying, which cost me a few tenths of a second.” This turned out to be a blessing as the settings turned to be just right for the cooler temperatures when the race started in the late afternoon.

Starting in 33rd position for the 200-lap race, Labbé had a miraculous avoidance on the first restart early in the race, then worked his way to 28th or 29th place, where he remained for the middle portion of the race. After another very close call when an incident blocked the track with 50 laps to go, Alex used the car’s speed and other driver’s ill luck to drive up to 23rd position, where he finished, and without a mark on the car!

After the race, a calm and collected Labbé confirmed “The car was good at the start so I could move up quickly. We had to correct some under steer during pit stops as the race went on, and ended up for the last run to the finish with the best combination of tires and settings. The car was quick and I managed to pass a few guys and end up 23rd at the flag. The car was great and it was fun to be racing with really good drivers. I want to thank everyone who made this possible, and can’t wait for my next Xfinity race.”

Bottas has been "able to eat" thanks to new weight rules