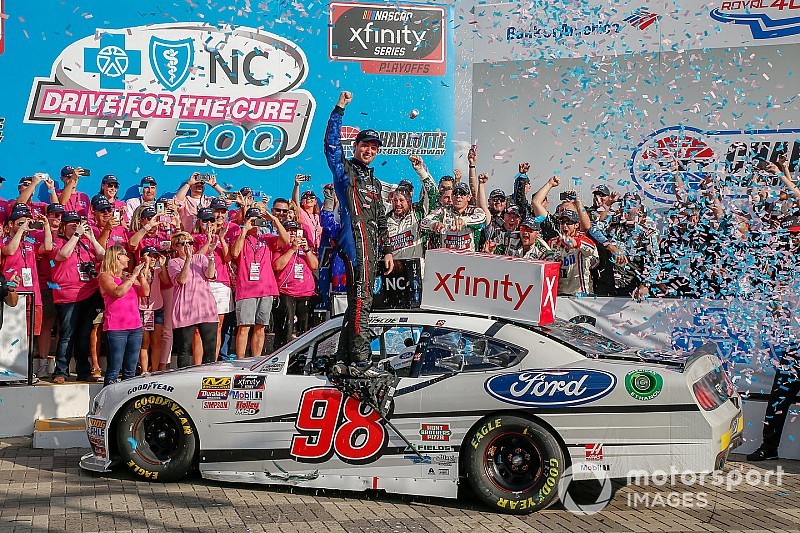 Chase Briscoe was finally able to salvage something good out of a difficult NASCAR season.

Running only a partial Xfinity Series schedule and with a season’s best finish of ninth, Briscoe was likely not among picks for favorites for the inaugural race on the Roval at Charlotte Motor Speedway.

But Briscoe cleared Daniel Hemrick on a restart with 10 of 55 to go and then held off veteran Justin Marks to claim the win in the Drive for the Cure 200, his first series victory.

"This is unreal. I was four seconds off in practice and my guys stuck behind me and kept working with me," Briscoe, 23, said. "It's just an honor and privilege to drive a race car and to do it for my hero Tony Stewart and get a win.

"I feel like my career was getting really bad this year and I needed to get my stock back up and I just can't believe it. Thanks to all these fans for coming out - what an awesome crowd. I hope you all enjoyed that race, it's going to be a good one tomorrow."

Asked about getting his first career win at Charlotte, Briscoe said, "It's huge to me. Everybody had to adapt to it and figure it out, and I don't know that I'm necessarily the best at it but I felt like I just tried not to hit anything and this thing hardly has a scratch on it."

Following a wreck in Turn 1 triggered by Ryan Truex and Ty Majeski, the race returned to green with 19 laps remaining and Briscoe leading the way.

Andy Lally, who was also involved in that incident and ran up front almost the entire race, was forced to take his No. 90 Chevrolet to the garage.

With 14 laps left in the race a caution was displayed for a large piece of debris on the backstretch. On the restart on Lap 45, Briscoe remained out front followed by Hemric, Marks and Cindric.

With nine laps left, Briscoe held about a one-second advantage over Marks, with Cindric close behind in third.

Briscoe continued to hold about a one-second lead over Marks with five laps left in the race. Cindric was in third, Preece in fourth and Bell in fifth.

Over his radio, Briscoe was told, “Don’t change a thing and they can’t touch you.”

Bell held off a fast-approaching Cole Custer to take the Stage 2 victory.

Following the break between stages 1 and 2, Hemric elected not to pit and remained the leader as the race returned to green on Lap 18. He was followed by Bell and Briscoe.

Briscoe quickly made his way into the lead going through Turn 1 on the restart.

Katherine Legge spun off Turn 6 on 18 but was able to get turned around and continued on.

With 10 laps left in the second stage, Briscoe held almost a second lead over Hemric followed by Bell and Lally.

On Lap 25, Brendan Gaughan went around but was able to continue on without a caution being displayed.

With five laps to go in the stage, Briscoe held a more than 1.6-second advantage over Hemric. Bell was in third followed by Custer and Tyler Reddick.

Hemric elected to pit with four laps remaining in the stage – his first stop of the race – and Cindric also pit on the same lap, perhaps for his final stop. Briscoe soon followed them down pit road.

Among the others who pit were Marks, Ryan Truex, Majeski, Justin Allgaier and Matt Tifft.

On Lap 29, Allgaier and Ryan Sieg spun in between Turns 3 and 4 but were able to continue.

After a late-stage spin by Cindric, Hemric took the lead and held off Custer for the Stage 1 win.

Reddick was third, Cindric fourth and Marks completed the top-five.

Cindric held off all challengers to lead what turned out to be a clean first lap only to see the caution come out on Lap 2 when Alex Labbe stalled on the track with what he believed to be a broken driveshaft.

Labbe’s team was able to make repairs and he returned to the track one lap down.

On the restart on Lap 4, Cindric led the way followed by Reddick, Hemric and Marks.

With 10 laps remaining in the stage, Cindric had move out to a more than 1.5-second lead over Reddick.

On Lap 7, Majeski spun in the infield course between Turns 1 and 2 but was able to continue on with an issue.

On Lap 10, Hemric was able to get around Reddick exiting Turn 2 to move into the runner-up position behind Cindric.

Several drivers elected to pit before the conclusion of the stage, including Sadler, Bell, Lally and Briscoe.

With two to go, Cindric spun off Turn 6 and went off course which allowed Hemric to move into the lead for the first time. Cindric returned to the track in fourth.

Before the start of the race, the cars of Ryan Truex (unapproved adjustments), Spencer Gallagher and J.J. Yeley (backup cars) had to start from the rear of the field.

NASCAR clarifies the penalty for cutting the course at Roval

Daniel Hemric "frustrated at myself" after costly late-race error