Chastain: "I’ll never forget the peaks and valleys of this weekend"

Ross Chastain was grateful just for the opportunity but little did he know what all would encompass his first NASCAR Xfinity Series start with Chip Ganassi Racing. 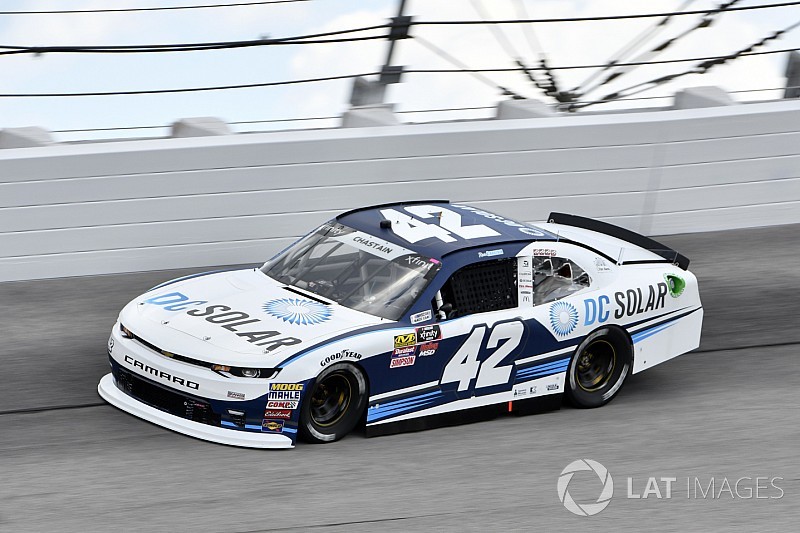 Saturday’s Sport Clips 200 at Darlington (S.C.) Raceway was the first of three races Chastain will drive CGR’s No. 42 Chevrolet this fall and he got off to a rousing start.

Chastain’s team seemed especially pleased with his effort behind the wheel, with his spotter, Derek Kneeland, saying over the team radio at one point, “I tell you one thing, he listens.”

On Lap 112 of 147, Harvick had closed to challenge Chastain for the lead. As Chastain moved to avoid a lapped car, he and Harvick made contact and Chastain then appeared to get nudged up into the wall.

As Chastain came back down the track, he hooked Harvick’s No. 98 Ford and sent him spinning and into a wreck, which ended his race.

Chastain’s No. 42 also received significant damage in the incident and after multiple stops on pit road under green and yellow for repairs, he limped home to a 25th place finish.

Harvick was livid after the incident and briefly parked his car in Chastain’s pit stall before being told to move along by NASCAR officials.

“I tried to stay as low as I could and he just rode on my door. That’s just a really inexperienced racer and a really bad move there and got the air and got on beside me and just kept going up the race track. I couldn’t do anything with the wheel,” Harvick said.

“So, you’ve got a really inexperienced guy in a really fast car and made a really bad move, and then wrecked me down the back straightaway and hooked me to the right. That’s probably the reason that he’ll never get to drive many of them again.”

Immediately after the race on pit road, Chastain was asked about the incident with Harvick.

Later, Chastain expanded on his view of the incident after seeing a brief TV clip.

“There were lapped cars, there was a lot going on. I’ve never been in that situation but I trust the guys I’m racing around,” he said.

“Nobody belongs here. I think we are all very fortunate to get this opportunity. No matter what, I’ll never forget this. I’ll never forget the peaks and valleys of this weekend. I left final practice pretty dejected and my guys just reminded me to just drive the car.

“I made on mistake on a restart and Kevin got by me and then later I was able to get back by him. This is something that I really will never forget.”

Asked if he intentionally retaliated against Harvick, Chastain said, “After I hit the wall, I was out of control.”

Chastain will return to JD Motorsports’ No. 4 team next weekend at Indianapolis. His final two races with CGR will be at Las Vegas and Richmond.