Austin and his team demonstrated determination, perseverance and that never-give-up attitude.

HOMESTEAD, Fla. (Nov. 16, 2013) – Austin Dillon, driver of the No. 3 AdvoCare Chevrolet Camaro, claimed the 2013 NASCAR Nationwide Series (NNS) championship with a ­­­12-place finish in the season-ending race at Homestead-Miami Speedway. His title, the first for Dillon and fourth for team owner Richard Childress, marks Chevrolet’s 17th Driver’s Championship since the inception of the series in 1982. 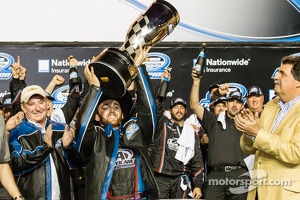 In the first year of NNS competition for the Chevrolet Camaro, Dillon piloted the nameplate to seven pole awards. The 23-year old first-time NNS champion displayed the model of consistency by amassing 13 top-five’s and 22 top-10’s over the 33-race season. Dillon is now the third driver in NASCAR history to win both a NASCAR Camping World Truck Series title (2011) and a NNS championship.

“We fought,” said Dillon. “My guys kept me positive in the car. I just knew I had to go on that last restart. I’ve been criticized on restarts for a long time, but that was a pretty good one. I just hung up against the wall there and tried to ride it out. Thank goodness for this AdvoCare Chevrolet and everybody that helped us. My grandfather (Richard Childress) and my whole family are so supportive. My team is the best and this is amazing. We showed tonight that you never give up.”

“Austin’s championship was a great way to end the 2013 NASCAR Nationwide Series season for Chevrolet,” Campbell added. “We’d also like to congratulate Kyle Larson for winning the Series’ Sunoco Rookie-of-the-Year title. It’s going to be great having both Austin and Kyle as part of Team Chevy in the NASCAR Sprint Cup Series next year.”

The NNS resumes competition at the season opening race at Daytona International Speedway in February 2014.