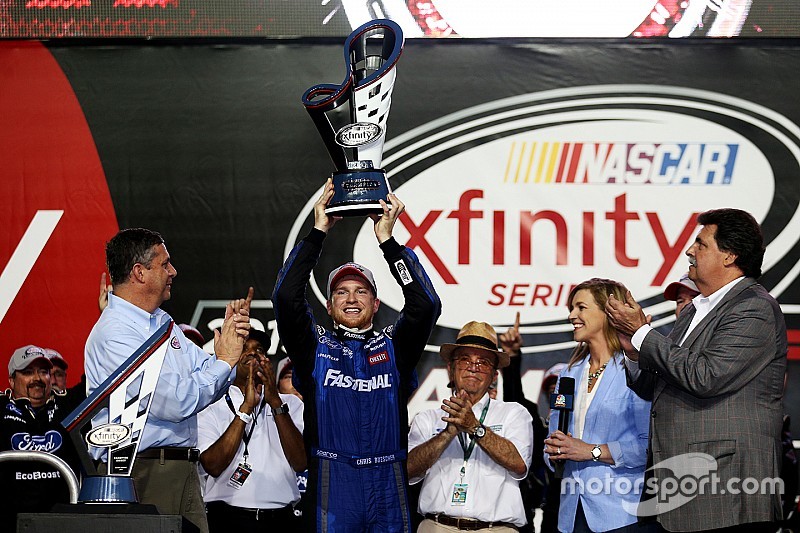 Larson has struggled through a sophomore slump this season in the Sprint Cup Series and his most recent NASCAR win came in May 2014 at Charlotte Motor Speedway. After a wild duel with Kyle Busch, Larson held off Austin Dillon to pick up his first win of the 2015 season.

After the race, Larson elected not to do a celebratory burnout, saying he deferred to Buescher, who earned his first NASCAR title.

“All these guys prepared a great car for me. From the moment we unloaded off the truck, I don’t think we made any adjustments. The car was just amazing,” said Larson, who earned his third career series win.

“It was just a matter of me getting in front of (Busch) in the short runs. I was really good in the long runs. I about gave it away on the last restart. It got pretty hairy there and I almost wrecked myself with Erik Jones trying to get after it.”

Tire issues forced Busch out of the race late and the lead turned over to Dillon. While Larson was running Dillon down, Dillon hit the wall which allowed Larson to finally clear him for the lead with four of 200 laps remaining.

Buescher came into the race with an 18-point advantage in the championship race over reigning champion Chase Elliott. Both drivers fell a lap down midway through the race with Elliott finishing eighth and Buescher 11th.

15 points to the good

Buescher, 23, ended up with a 15-point margin over Elliott as he clinched Ford Racing’s only championship this weekend.

“I was a little nervous. All things considered that was exactly what we needed to do and we knew that and knew we were capable of doing it,” Buescher said. “I am glad we could pull it off for all the (sponsors) that were on board all year and all the fans.

“I know the weather wasn’t ideal today but they hung in there with us and we made it through this thing and get to celebrate.”

Buescher was vocal in his dislike for “points racing” but understood the necessity to look at the bigger picture as the season drew to a close.

“Points racing is not the most fun way to run the last 10 races of the season but it is important,” he said. “This is what we have been fighting for since February and Daytona and these guys have done such a great job and stuck in there with us all year and had no mechanical failures or DNFs. It is a huge accomplishment for our team.”

Buescher was never lower than third in the series standings and held the No. 1 spot for the final 24 weeks of the season. He won twice at Iowa and once at Dover on his way to providing team owner Jack Roush his eighth championship in NASCAR’s three national series – Cup, Xfinity and Trucks.

Jones finished third in the race, Brian Scott was fourth and Ryan Blaney was fifth.

Daniel Suarez finished sixth and clinched rookie of the year honors. In his first full season of NASCAR competition, the Mexico native finished fifth in the series standings.

“It was a good 2015 – a lot of new things. A lot of learning processes and we learned a bunch of things,” he said. “I’m happy with that and earning Rookie of the Year was one of the goals of 2015 and thanks to Joe Gibbs Racing and (our sponsors) we were able to make this happen. I’m very happy overall.”