Christopher Bell completed a sweep of the NASCAR Xfinity Series races at Richmond (Va.) Raceway and locked himself into the second round of the playoffs. 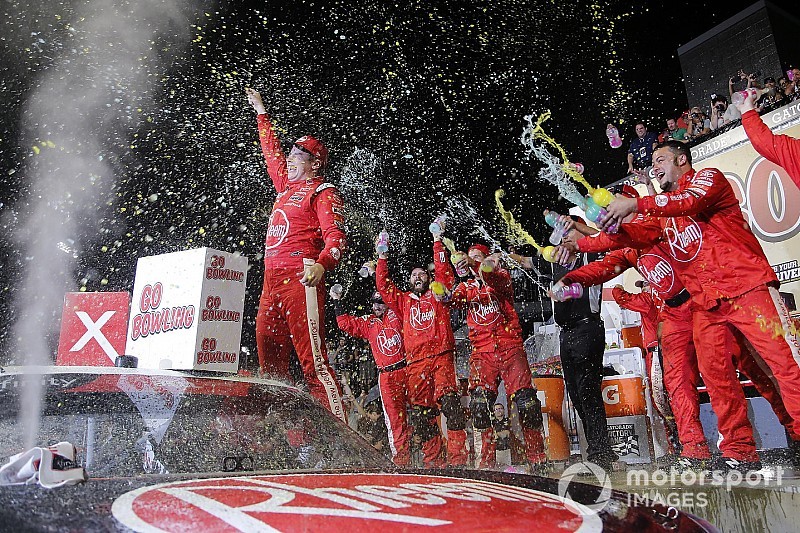 Bell cleared Matt Tifft on a restart with 14 of 250 laps remaining in Friday night’s GoBowling.com 250 and held off Ross Chastain to earn his fifth win of the season.

The win automatically advances him to the second round of the playoffs regardless of his performance at the next two races, on the Roval course at Charlotte Motor Speedway and Dover, Del.

“I tell you what, that’s pretty cool,” Bell said. “It’s not very often you get to win with a car that’s not a winning car. So, we’ll take it.

“I want to thank my pit crew for the awesome pit stops tonight. Jason Ratcliff (crew chief) did a great job making this thing better each and every time we hit pit road.

“I’m just pumped. To be able to sweep Richmond and get five wins on top of that, moving on to Round 2, I couldn’t be happier.”

Daniel Hemric finished third, Dale Earnhardt Jr. – who led the most laps (96) – was fourth and Tifft completed the top-five.

With 50 laps remaining, Earnhardt had moved out to a 1.5-second lead over Hemric with Bell more than three seconds behind the leader.

On Lap 218, Katherine Legge hit the Turn 2 wall to bring out a caution, which bunched the field back up. All of the lead-lap cars elected to pit for tires.

Tifft was first off pit road and took the lead on the restart with 25 laps remaining in the race. He was followed by Earnhardt, Bell, Hemric and Chastain.

On the restart lap, Cole Custer got into Justin Allgaier – both playoff contenders – in Turn 3 to trigger a wreck that brought the caution back out. Allgaier’s damage was extensive and he could not continue.

On the restart with 14 to go, Tifft continued to lead the way, followed by Bell, Chastain and Earnhardt.

Bell cleared Tifft for the lead on the restart and quickly moved out to solid lead.

With 10 laps left, Chastain moved into second behind Bell.

Earnhardt claimed his first stage win as the second 75-lap stage ended under caution for a wreck with two laps to go.

Following the break between Stages 1 and 2, Bell was the first off pit road and returned to the lead when Stage 2 went green on Lap 86. He was followed by Hemric, Earnhardt, Allgaier and Elliott Sadler.

Austin Cindric was penalized during the stops for improper fueling and had to restart from the rear of the field. Tifft originally was second coming off pit road but had to pit again for a flat left-front tire.

With 50 laps remaining in the stage, Bell held a small advantage over Earnhardt with Allgaier close behind in third.

Ryan Preece was forced to pit under green with a right-rear flat tire. He returned to the race in 27th and one lap down.

With 35 laps left in the stage, Bell continued to hold off Earnhardt as Allgaier dropped to more than 1.6-seconds behind the leader.

Chastain, who started the race from the rear of the field, moved into the top-five for the first time on Lap 120.

With 26 laps left, Earnhardt finally made his way around Bell to take the race lead for the first time.

Earnhardt built a more than one-second lead over Bell with 15 laps remaining in the first stage.

On Lap 147, Ty Majeski wrecked hard on the backstretch after contact with Ryan Reed to bring out a caution. He was running 14th at the time.

Earnhardt was third, Tifft was fourth and Allgaier completed the top-five.

Bell, the pole-winner, led the first eight laps until Allgaier got around him and moved out front on Lap 9.

With 60 laps remaining in the first stage, Allgaier held a small advantage over Earnhardt as Bell dropped back to third.

On Lap 24, Bell moved back into the second position as Earnhardt appeared to wear his tires while attempting to run down Allgaier for the lead.

Chastain, who started from the rear, made his way up to 12th with 50 laps left in the first stage.

Hemric got around Earnhardt for the third position on Lap 30 as Earnhardt dropped back into the fourth position.

Bell finally cleared Allgaier to move back into the lead on Lap 36. But Allgaier powered back on the outside to take it right back.

Hemric ran down both drivers to take the lead for the first time in the race on Lap 45. Bell moved into the second position in an attempt to challenge for the lead on Lap 52.

With 20 laps remaining in the stage, Hemric had moved out to a more than one-second lead over Bell.

With 10 to go, Hemric continued to lead over Bell as Earnhardt moved back into third.

Reed and Chastain, both playoff contenders, had to start the race from the rear of the field for their teams making unapproved adjustments to their cars following qualifying.

Christopher Bell: 2020 was "definitely a down year for JGR"