Christopher Bell weathered a late restart against rival Cole Custer and held on for his fourth NASCAR Xfinity Series win of the season. 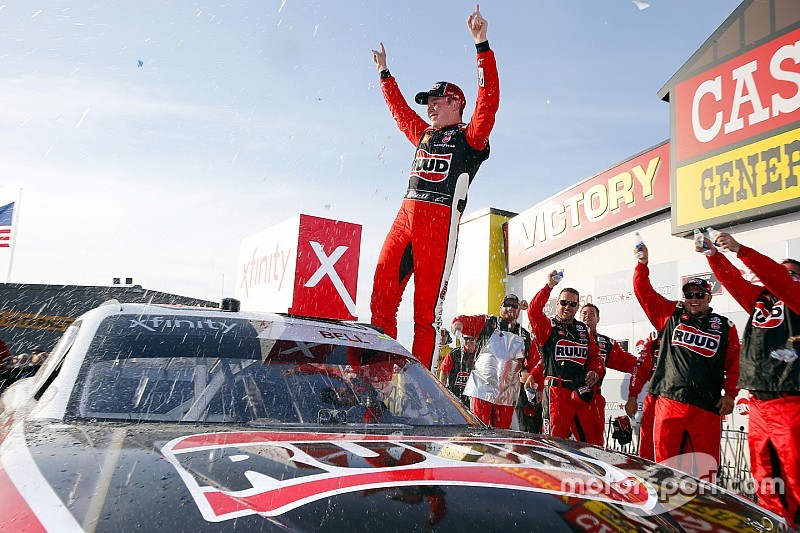 Following a caution from a late-race incident, Bell got a jump over Custer on a restart with 10 of 250 laps remaining and held him off for the win in Sunday’s CircuitCity.com 250 at Iowa Speedway.

The victory is Bell’s fourth of the season, giving him the most of any driver in the series. It is also the 12th of his career.

“Man, it’s pretty cool,” said Bell, who led a race-high 186 laps. “Thank you to all our partners that help put on this great show in the NASCAR Xfinity Series.

Tyler Matthews hit the wall on Lap 179 to bring out a caution which set up a likely final round of pit stops for the lead-lap cars.

Bell was the first off pit road and lined up as the leader when the race returned to green on Lap 187. He was followed by Custer, Cindric, Allgaier and Smith.

With 40 laps remaining in the race, Bell maintained a 1.7-second lead over Custer with Allgaier running in third.

Custer hit the wall ran against it through Turn 2 on Lap 216 which brought out a caution. All of the lead-lap cars elected to pit.

Custer caught Bell at the line and was the first off pit road, thus handing him the lead when the race restarted on Lap 223. He was followed by Bell, Allgaier, Cindric and Smith.

Bell and Custer banged fenders on Lap 224 which allowed Bell to clear Custer and reclaim the lead.

Chad Finchum hit the wall between Turns 1 and 2 on Lap 235 to bring out another caution. Gragson received the free pass and returned to the lead lap. On the restart with 10 laps to go, Bell led the way followed by Custer, Allgaier and Burton.

Bell cruised to the Stage 2 win over Custer and led 62 of the first 120 laps of the race.

Burton ended up third, Cindric was fourth and Allgaier completed the top-five.

Following the break between Stages 1 and 2, most of the lead-lap cars remained on the track and Bell still held the lead when the race returned to green on Lap 69.

On Lap 75, Gragson brought his No. 9 Chevrolet to pit road after he said he thought “something had broken.” He fell two laps down while his JR Motorsports team was making repairs.

With 40 laps remaining in the stage, Bell had built up an almost 2-second lead over Custer as Allgaier ran in third.

On Lap 85, Brandon Brown brought his car down pit road with smoke coming out of the cockpit of the car. Once he stopped, his team members helped pull him from the car and he struggled to stand.

Brown was taken to the infield care center, treated for smoke inhalation and eventually released.

With 30 to go in the stage, Bell continued to hold a solid lead over Custer. Allgaier remained in third, Burton was fourth and Smith was fifth.

Justin Haley tagged the wall in Turn 2 with five laps to go in the stage but he was able to continue on and there was no caution.

Bell passed Custer with two of 60 laps remaining and held on to claim the Stage 1 win, his seventh stage victory of the season.

Allgaier finished third, Gragson was fourth and Burton rounded out the top-five.

Custer, who started on the pole, had moved out to a 1.6-second lead after the first 10 laps.

After 20 laps, Custer maintained a solid lead over Bell with Gragson in third. Burton was fourth and Nemechek fifth.

On Lap 31, smoke poured out of the car of David Starr as he crossed the start/finish line to bring out the first caution of the race. On the restart on Lap 39, Custer continued to lead the way followed by Bell and Gragson.

With 20 laps remaining in the first stage, Custer held a small advantage over Bell as Allgaier made his way to third.

Joey Gase hit the wall on Lap 49 to bring out another caution. Most of the lead-lap cars elected to pit with Custer the first off pit road.

Haley stayed out to inherit the lead and remained out front when the race returned to green on Lap 57. Custer restarted sixth.

Custer quickly reclaimed the lead on the restart and Bell passed Custer for the top spot with two laps remaining in the stage.

Haley had to start the race from the rear of the field after his team made an engine change over the weekend.

AJ Allmendinger after Vegas win: ‘I don’t take it for granted’