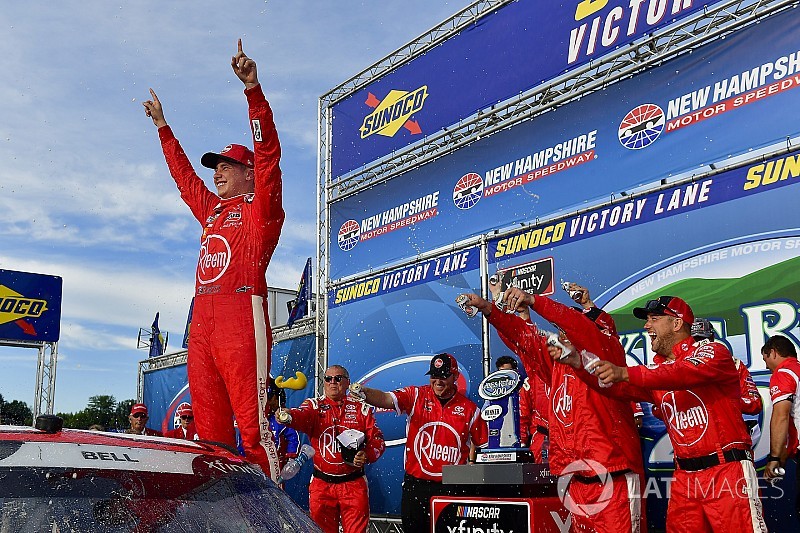 It’s two in a row for Christopher Bell.

Bell grabbed the lead on a restart with 18 of 200 laps remaining and held off Brad Keselowski to win Saturday’s Lakes Region 200 at New Hampshire Motor Speedway for his second consecutive NASCAR Xfinity Series victory.

“Thank you guys, thank everyone on this team,” Bell said over his team radio as he took the checkered flag.

The win is his third in the series this season and fourth of his career. Bell's victory was also the fourth consecutive in the series at New Hampshire for Joe Gibbs Racing.

With 41 laps remaining in the race, a final round of green-flag pit stops began. The cycle got interrupted on Lap 187 when Jeremy Clements slammed into the barrels at the end of pit road.

The race was red-flagged from 7½ minutes as track workers cleaned up the mess from the Clements’ incident.

"The better tires, they didn't hurt us, that's for sure," Bell said in Victory Lane. "Jason (Ratcliff, crew chief) was able to put four (new tires) on there. It was a big deal. "We got going on that long green-flag run and I was really nervous because because I didn't have a tach (it failed during the race). I didn't know how I was going to get down pit road without a problem. "After yesterday, I knew our Camry was really good. I knew it was going to be hard. The first stage of the race I was able to get out (front) for a while."

When the race returned to green on Lap 173, Keselowski led the way but had taken only right-side tires. He was followed by Daniel Hemric (also on two tires) and Elliott Sadler (who took four). Bell and Preece completed the top-five and both with four new tires.

Bell quickly moved into second on the restart with Nemechek got up to third.

On Lap 178, Garrett Smithley and Chad Finchum got together to bring out another caution. The race returned to green with 18 to go with Keselowski in the lead followed by Bell and Nemechek.

Bell, with a push from Nemechek, managed to clear Keselowski on the restart to take the lead.

With 10 to go, Bell held a small advantage over Keselowski with Preece in third.

Keselowski held off a furious charge from Hemric and Preece to earn the Stage 2 victory.

The three drivers battled for the lead on a restart with two laps remaining in the 45-lap segment but Keselowski was able to pull away.

Following the break between Stages 1 and 2, Keselowski gained four positions on pit road and took over the lead when Stage 2 went green on Lap 54. He was followed by Preece, Nemechek and Bell.

Preece dove to the inside of Keselowski and grabbed the lead on the restart as Bell moved into third.

On Lap 58, Keselowski moved back around Preece to retake the lead as Bell remained in third.

With 25 laps remaining in the stage, Keselowski held a small advantage over Preece. Keselowski appeared to have difficulty communicating with his team over the radio since the start of Stage 2.

On Lap 71, a caution was displayed for debris on the backstretch. Keselowski remained on the track and continued to lead when the race returned green on Lap 75.

On the restart, Preece again dove to the inside of Keselowski to challenge for the lead but Keselowski was able to hold him off.

Ross Chastain wrecked on Lap 79 to bring out the caution again. Most of the lead-lap cars elected to stay out but Bell pit for tires and fuel.

Keselowski continued to lead the way when the race returned to green with seven laps remaining in the stage.

Once again, Preece powered by Keselowski on the restart only to see Keselowski return the favor and reclaim the lead on the following lap.

Ryan Truex got turned by Ryan Reed to bring out a caution on Lap 85. The incident also collected Justin Allgaier and Kaz Grala. The race returned to green with two laps left in the stage.

Bell dominated the first segment, grabbing the lead on the start and leading all 45 laps to collect the stage victory.

“Probably need to turn a little better,” Bell told his team over the radio. “I started sliding, laterally, at the 3/8ths mark.”

Bell took the early lead in the race with Preece falling in line behind him in the second position.

On Lap 13, Nemechek moved into the third position behind Preece, followed by Allgaier and Hemric.

With 20 laps remaining in the first stage, Bell held a small advantage over Preece with Nemechek more than two seconds behind.

With 10 laps left in stage, Bell had increased his advantage to nearly a second over Preece. Tyler Reddick scraped the wall in the Turns 1 and 2 and was forced to pit road for repairs.

Three drivers – pole-winner Keselowski, B.J. McLeod and Ryan Reed – had to start the race from the rear of the field. Keselowski and McLeod were late to the drivers meeting and Reed’s team made unapproved adjustments to his car after qualifying.