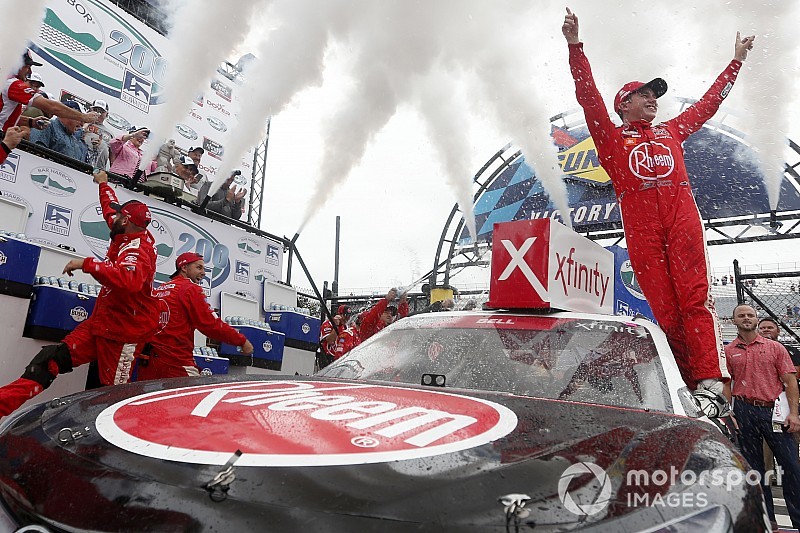 Christopher Bell continued his march toward his first Xfinity Series championship with another victory on Saturday.

Bell picked up his series-leading sixth victory of the season, holding off Cole Custer to win the Bar Harbor 200 at Dover (Del.) International Speedway.

The win is Bell’s second so far in the 2018 playoffs and seventh of his career. The six wins is also a new NASCAR record for wins by a rookie in the Xfinity Series.

“It’s been a lot of fun this year. They keep giving me really fast race cars,” Bell said. “It’s honor to drive for this company, this group of people.

“It’s pretty special. To all the people that came out today, thank you. If not for the fans, we wouldn’t be out here, so it’s an honor to have them.”

Asked what it meant to bypass Carl Edwards, Greg Biffle and Kyle Busch in wins in your rookie year, Bell said, "It the means the world. To be able to have the season we had, it’s been a career year for me. It’s all credit to everyone at Joe Gibbs Racing and my crew chief Jason Ratcliff."

Advancing to the Round of 8

Along with Bell, advancing to the second round of the playoffs are Daniel Hemric, Allgaier, Custer, Elliott Sadler, Tyler Reddick, Austin Cindric and Matt Tifft.

"It was very intense, especially the last part of the race," Tifft said. "We weren't very good today, we've had a lot of strong runs lately, but that just wasn't one of them."

With 45 of 200 laps remaining, Bell had built up an almost 3-second lead over Custer. Allgaier followed in third, five seconds behind the leader.

On Lap 162, Josh Bilicki got into the Turn 4 wall to bring out a caution. All of the lead-lap cars elected to pit for fuel and tires, since everyone had to make at least one more stop.

Jones elected to take two tires and took over the race lead on the restart with 29 laps remaining. He was followed by Bell, Custer, Gallagher and Preece.

Playoff contender Ross Chastain was penalized during his top by NASCAR for speeding on pit road and had to restart from the rear of the field.

Bell quickly got around Jones on the restart to retake the lead.

On Lap 179, Chastain got into Tifft in an attempt to pass and Tifft got into Chase Briscoe, who hit the wall and brought out a caution. On the restart with 17 laps to go, Bell led the way followed by Custer, Preece, Allgaier and Jones.

Hemric held off a fast-approaching Bell to claim the Stage 2 victory. He also collected enough points to clinch a spot in Round 2 of the playoffs.

Allgaier ended up third, Gallagher was fourth and Custer completed the top-five.

Following the break between Stages 1 and 2, all of the lead-lap car pit for fuel and tires with Hemric the first car off pit road. He led the way when Stage 2 went green on Lap 52, followed by Allgaier and Bell.

On the restart, Allgaier powered around Hemric to take the lead for the first time in the race.

With 25 laps left in the stage, Allgaier held a nearly 1-second lead over Hemric. They were followed by Bell, Gallagher and Custer.

On Lap 75, Hemric made his way around Allgaier on the inside to retake the lead.

With 10 laps remaining in the stage, Hemric had already moved out to a more than 1-second lead over Allgaier. They were followed by Bell, Gallagher and Custer.

Bell went to the outside and passed Allgaier to take over the second position with eight laps left.

Bell easily held off Hemric to take the Stage 1 victory, his sixth stage win of the season.

Allgaier was third, Jones was fourth and Gallagher completed the top-five.

Hemric started on the pole but Bell quickly got around him to take the lead on Lap 1.

Ten laps into the race, Bell held a small advantage over Hemric with Allgaier running close behind in third.

With 25 laps remaining in the first stage, Bell still maintained a small lead over Hemric. They were followed by Allgaier, Jones and Gallagher.

With 15 laps to go in the stage, Bell had opened up a 1.6-second advantage over Bell as nearly half the 40-car field was already a lap down.

Hemric had cut the margin down to half-a-second with five laps remaining in the stage.

Harmon had to start the race from the rear of the field after making an engine change over the weekend.

NASCAR Heat 3 contest continues on the Road to Miami - video