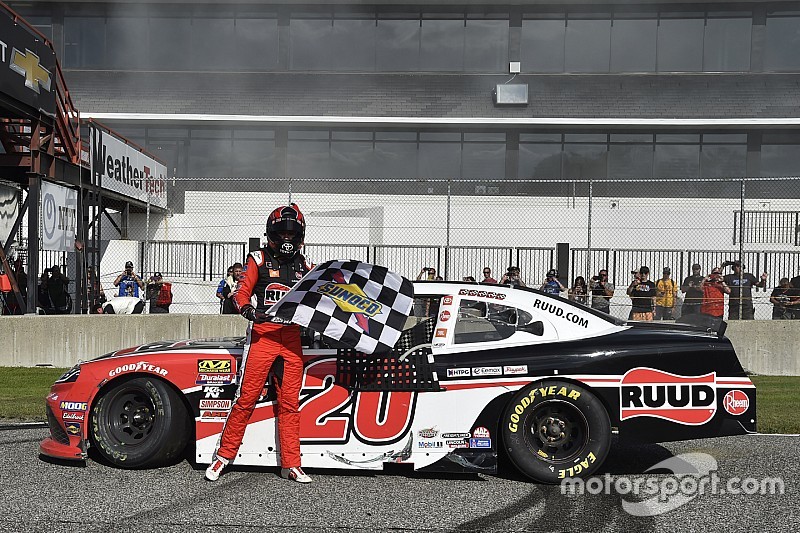 Christopher Bell hasn’t considered himself a good road course racer. He can now.

Bell held off a wild charge from Austin Cindric on new tires following a restart with two of 45 laps remaining to take the win in Saturday’s CTECH 180 at Road America.

The victory is Bell’s first on a road course in his NASCAR career. The win is Bell’s sixth of the 2019 season and 14th of his Xfinity Series career.

“Man, I’m honestly in shock,” Bell said. “I really butchered qualifying and tore the crap out of the left-front. I felt like once we got in the race there, we’d be able to drive by those guys. Instead, they dropped the green flag and they were driving by me. That wasn’t much fun.

“Then I told Jason (Ratcliff, crew chief) I was really, really tight. We got those tires off and he said the left-front was hurt pretty bad. We got pretty good there when we put our new set of tires on.

“That strategy worked out well for us coming in there (with 14 to go) and then the yellow coming out. This car was really, really fast today. We’ve had a great road course season.”

In the three road course races so far this season, Bell has finished second, second and now first. Cindric, who finished second Saturday, won the two races in which Bell was runner-up.

In a last-gasp chance to make it three road course wins in a row, Cindric pit for his last set of new tires just before the final restart. He restarted 20th, was fifth with one to go and moved into second in the last turn of the last lap.

“In this kind of racing, you pretty much know that you’re going to be used up if you’re slower, so we wanted to go on offense,” Cindric said. “That was our strategy all day and we probably just needed one or two laps to get (car) in Victory Lane.

With 20 of 45 laps remaining in the race, Matt DiBenedetto held a small but steady lead over Bell as Reddick ran in third. Cindric was fourth and A.J. Allmendinger completed the top-five.

Cindric was forced to pit on Lap 28 after sustaining damage from a run-in with Allmendinger on the track.

After 30 laps, DiBenedetto maintained a small advantage over Bell as Allmendinger worked his way up to third.

With 14 laps to go, Bell was the first to make his final pit stop.

On Lap 32, Brandon Jones blew a left-front tire that did extensive damage to his No. 19 Toyota and brought out a caution. Most of the lead-lap cars pit but Bell and Cindric stayed out as they were off sequence from the others.

On the restart on Lap 35, Bell was followed by Garrett Smithley and Reddick.

Cindric powered around Bell in Turn 3 to take the lead for the first time in the race.

Bell stayed closed and went to the inside of Cindric in Turn 3 with nine to go and came away with the lead.

With five laps to go, Gray Gaulding went off course in Turn 1, through the gravel pit and backed into the tire barrier, which brought out a full-course caution.

“Brake pedal went to the floor,” Gaulding said over his radio.

Most of the lead-lap cars stayed out but Cindric – who had one new set of tires remaining – elected to pit to put them on.

On the restart with two laps to go, Bell led followed by Allmendinger, Reddick, Briscoe and Gragson. Cindric took the green flag in 20th.

Briscoe held off Justin Haley to win Stage 2, his second stage win of the 2019 season.

Following the break between Stages 1 and 2, several more lead-lap cars elected to pit but Cindric remained on the track and took over the lead when the race returned to green on Lap 13.

Gragson was penalized for being too fast on pit road and had to restart from the rear of the field.

DiBenedetto jumped into the lead on the restart and Custer went off track in Turn 3, knocking down two sponsor signs in the process.

With five laps remaining in the second stage, DiBenedetto built up more than a 4-second lead over Grala as Bell ran third. Custer was forced to make yet another stop on pit road for repairs.

On Lap 17, Cindric made his first pit stop of the race.

Allmendinger and Grala elected to pit on Lap 18, as did DiBenedetto.

With two laps left in the stage, Haley took over the race lead followed by Briscoe and Smith.

Briscoe got around Haley near the end of Lap 19 to take the lead for the first time in the race.

Allmendinger locked up the Stage 1 win when Justin Allgaier ran off course in Turn 1 on the last lap of the stage to bring out a caution.

Allgaier got stuck in a gravel pit, taking him out of contention early.

Allmendinger, who started on the pole, took control early in the race and had moved out to a 1.4-second lead over DiBenedetto after four laps. Cindric ran third, Custer fourth and Reddick fifth.

On Lap 5, Brandon Jones went off course in Turn 11 but was able to continue on without further incident. Jones did make a pit stop at his next opportunity.

Halfway through the first stage, Allmendinger maintained more than a 1.5-second lead over DiBenedetto with Cindric in third.

With three laps remaining, DiBenedetto, Bell and Smith were among a group of drivers who elected to make the first pit stop.

After nine laps, Allmendinger had expanded his lead to more than 4 seconds over Cindric.

Before the race, the cars of Jones (backup car), Dexter Bean (engine change), Nic Hammann, Brandon Brown and Loris Hezemans (all unapproved adjustments) had to move to the rear of the field.

Cindric takes the title: ‘Why couldn’t we?’