BOWYER BACK FOR SUPERSPEEDWAY ACTION: Clint Bowyer will climb back behind the wheel of the No. 33 Rheem Chevrolet Impala this weekend at Talladega (Ala.) Superspeedway for the first time since the NASCAR Nationwide Series season opener at Daytona (Fla.) International Speedway in February. Bowyer, who sat on the pole, finished a close second to Kevin Harvick Inc. (KHI) teammate Tony Stewart in the first race of 2011. The KHI one-two finish, the third for the company in Nationwide Series competition, also landed the organization in the record books. Stewart edged the No. 33 by 0.007 seconds, the closest finish in the Nationwide Series at Daytona and the third closest in series history. 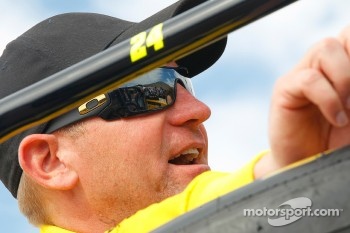 WINLESS AT DEGA: The Emporia, Kan. native has seven starts at the 2.66-mile Alabama track in the Nationwide Series with one top-five and two top-10 finishes. Bowyer started from the pole once (2004) and has a best finish of fifth (2006). This weekend will mark Bowyer's first Nationwide Series race at the track with KHI and he'll be on a mission to erase his goose egg in the Talladega win column.

KHI SUCCESS: Over the last eight seasons, the KHI stable has fielded cars between six different drivers at Talladega: Tony Stewart (three races), Burney Lamar, Bobby Labonte, Cale Gale, Ryan Newman and KHI co-owner Kevin Harvick. In total, the organization has posted four top-five and four top-ten finishes, along with a victory from Labonte behind the wheel of the No. 77 KHI Chevrolet in 2007.

CHASSIS HISTORY: The No. 33 Rheem team will utilize chassis No. 067 this weekend at Talladega Superspeedway. This is the same chassis the team competed with in the season-opening event at Daytona (Fla.) International Speedway in February. In that event, Bowyer drove the No. 33 machine to a second-place finish.

I'm really looking forward to being back in the No. 33 KHI car.

PREVIOUS RACE RECAP: Paul Menard took to the driver's seat of the No. 33 Menards Chevrolet Impala last weekend at Texas Motor Speedway. In his first Nationwide Series start of the season and his first start with KHI, Menard qualified the No. 33 Chevrolet in the fifth position and drove to a third-place finish. The solid performance pushes the KHI team closer to the Owner's Point lead. The No. 33 is in third place, one point out of first.

What are your thoughts going into this weekend's race at Talladega Superspeedway?

"We were so close to winning the race at Daytona back in February. The No. 33 Rheem Chevrolet was super fast. We started from the pole and had a great run. We finished second and it was cool that KHI won with [Tony] Stewart but I really wanted to win that race. I'll have great teammates in Kevin Harvick and Elliott Sadler this weekend. I'm really looking forward to being back in the No. 33 KHI car and hopefully I'll get the win this time."