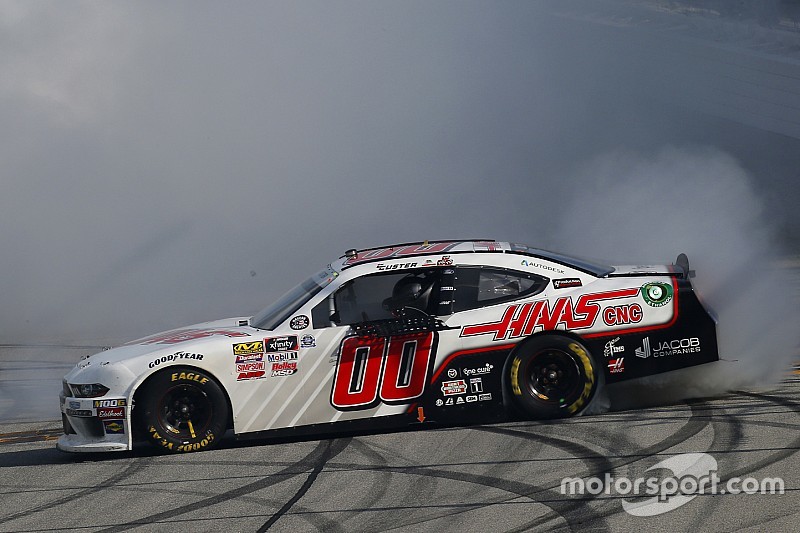 Custer, who led 151 of 200 laps, easily held off reigning Cup series champion Joey Logano to pick up his fourth win of the season and the sixth of his career.

“I think you can see we’re going to hit it hard this summer,” Custer said after the race. “We’ve got some great cars. The guys did an awesome job with the car this weekend – I don’t how you could get the car any better than in that last run.

“This is a great track. I love it. I’ve been wanting to win here for a long time.”

Asked if he and his team came into the race hoping what they did here would also work in the season finale at Homestead, Custer said, “For sure. I want to be good running (against) the wall and I think I got a lot better at that throughout the day. I think we can compare this to Homestead for sure.”

After 140 laps, Custer’s lead over Bell had increased to more than 3 seconds. Logano continued to run third, 4.5 seconds behind the leader.

With 49 laps to go, Logano was the first among the contenders to make his green-flag pit stop. Custer made his stop with 47 laps remaining.

With 28 laps to go, two lead-lap cars still had not pit but B.J. McLeod hit the wall to bring out a caution. Custer had made his way back to third at the time.

Once again, the lead-lap cars – including Annett and Noah Gragson who had not yet pit – headed down pit road for fresh tires. Annett was the first off pit road and led the way on the restart with 21 laps remaining. He was followed by Gragson, Custer and Logano.

Custer went three-wide on the restart and reclaimed the lead by the exit of Turn 2.

With 10 laps remaining, Custer maintained a more than 2-second lead over Logano while Bell had moved into third.

Logano took the Stage 2 win over Bell just as caution flew for Chase Briscoe, who spun on the last lap of the 45-lap segment.

Custer finished third, Jones was fourth and Reddick completed the top-five. Custer had pit for new tires late in the stage but could not make it back to the lead before its conclusion.

Following the break between Stages 1 and 2, all of the lead-lap cars elected to pit with Custer the first off pit road. On the restart on Lap 52, Custer led the way followed by Reddick, Bell and Logano.

By the next lap, Logano had already made his way into the second position.

With 30 laps remaining in the second stage, Custer maintained about a 1 second lead over Logano with Jones running in third.

After 70 laps, Custer had opened up a more than 1.5-second lead over Logano. Jones was third, Bell fourth and Reddick had dropped to fifth and was complaining of the handling of his car.

On Lap 76, Ryan Sieg spun in Turn 2 to bring out a caution. Several lead-lap cars elected to pit under the caution but Logano stayed out and took over the race lead.

The race restarted on Lap 85 with Logano out front followed by Bell, Allgaier and Cindric. Custer lined up 10th.

With two laps left in the stage, Logano continued to hold a small lead over Bell with Cindric in third.

Custer held off Reddick for the Stage 1 victory, his sixth stage win of the 2019 season.

Bell finished third, Jones was fourth and Logano rounded out the top-five.

Logano, who started on the pole, grabbed the early lead in the race but Custer went to the inside of Logano in Turn 2 and came out in Turn 3 with the lead on Lap 3.

Allgaier spun while running in second on Lap 11 to bring out the first caution of the race. The race returned to green on Lap 16 with Custer in the lead followed by Logano and Bell.

Logano quickly got around Custer on the restart to reclaim the lead as Custer dropped to second and Jones moved to third.

Custer and Logano swapped the lead on Lap 21 before Logano was able to get back around Custer for the top spot on Lap 22.

After 25 laps, Custer maintained a small advantage over Logano as Reddick had moved up to third. With 15 laps to go in the stage, Reddick had taken over the runner-up position behind Custer.

After 35 laps, Reddick had cut Custer’s lead to under a second as Bell had moved up to third.

With five laps remaining in the stage, Reddick continued to hound Custer for the lead but couldn’t get close enough to attempt a pass for the lead.

Six drivers had to move to the rear of the field to start the race – Chase Briscoe and Vinnie Miller for unapproved adjustments; Shane Lee for an engine change; Josh Bilicki for driver change; Jeff Green for missing the drivers meeting; and Chad Finchum because his crew chief missed the drivers meeting.