The biggest drama of Thursday’s first day of on-track activity on the Roval course at Charlotte Motor Speedway turned out to be a thunderstorm that cut the final practice short by 20 minutes. 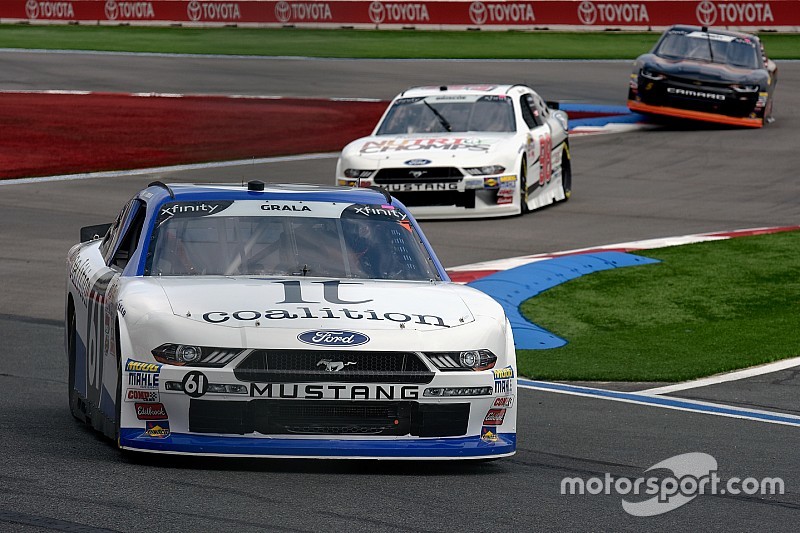 Only a handful of Xfinity Series cars participated in the first optional practice session but 30 cars had made laps by the time NASCAR halted the second session late Thursday afternoon due to lightning in the area.

Despite Xfinity teams’ lack of prior testing on the 2.28-mile, 17-turn course there were few on-track incidents. Brandon Jones twice went off course in the final session but was able to continue on without an issue both times.

Xfinity playoff contender Cole Custer ended up with the fastest average lap speed Thursday at 103.223 mph in the second session. He was followed by Austin Cindric, Tyler Reddick, Daniel Hemric and Justin Allgaier.

“I think we did an exceptional job of being prepared and fast right off the truck and I think it showed today,” said Cindric, who will drive Team Penske’s No. 22 Ford in Saturday’s Drive for the Cure 200.

“We have two more practices, a qualifying session and three stages of hard racing left so we still have a long ways to go.”

Cindric, who has extensive road course experience in sports car racing, said he felt the course layout met a lot of his expectations.

“I think you really approach it like a street course where there are different changes in the road, a lot of different compromises to find a line that is drivable,” he said. “I think we were able to do that pretty quickly throughout the day.

“In some ways, though, I think we’re all still trying to figure it out.”

“Obviously, it’s incredibly narrow. I think it’s no secret that tires are going to fall off and when that happens, stuff happens,” he said.

Noah Gragson to replace Sadler at JR Motorsports in 2019