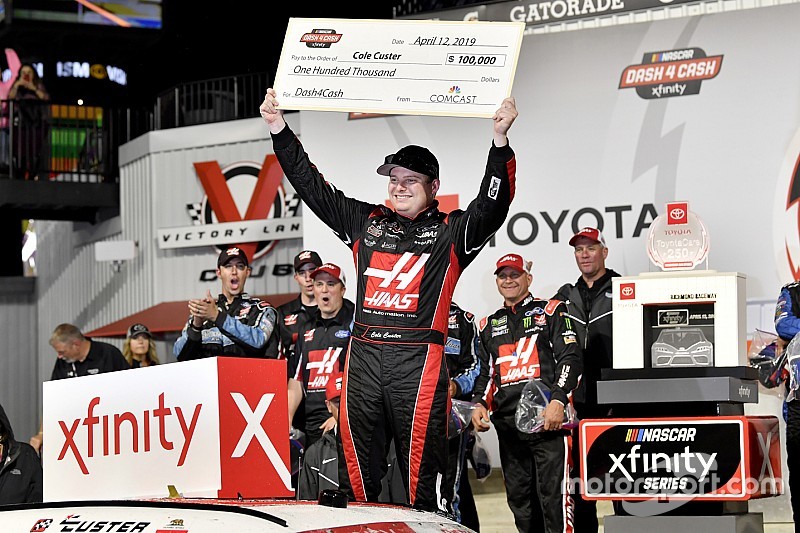 Custer pass Austin Cindric with 20 of 250 laps remaining and held on for the win in Friday night’s Toyota Care 250 at Richmond (Va.) Raceway, his second series victory in the past three races.

This victory came with a large bonus as Custer collects the $100,000 Dash4Cash bonus as the highest finisher among four eligible drivers.

The win is the fourth of Custer’s career.

"It was so frustrating at times," Custer said. "They kept telling me (rain) was 20 laps away (and) it never came. But we had a really great car. This one means a lot. We haven't had a short track win yet. We've struggled a lot at short tracks and this means a lot.

"My friends have given me a lot of crap for being bad at this place but we finally won. I'll have a little bit of bragging rights now, so that's nice. I'm just so happy. That's two wins - that's pretty awesome."

Asked what the strong start to the season means, Custer said, "I think we're in a great place. We're going to get better and better. We're starting to figure out our cars late in the race and we're going to be better the second time we come back to these tracks."

Justin Allgaier finished third, Tyler Reddick was fourth and Ryan Sieg completed the top-five. Custer, Cindric, Allgaier and Reddick will be eligible for the next $100,000 Dash4Cash bonus in two weeks at Talladega (Ala.) Superspeedway.

With 80 laps left to go, Custer held about a one second lead over Allgaier who was plowing through the field on fresh tires after pitting during the stage break.

Bell, who was involved in an accident in Stage 2, moved up to third with 70 laps remaining. Custer remained with a half-a-second lead over Allgaier.

On Lap 211, David Starr spun on the frontstretch after contact from Nemechek to bring out a caution. All of the lead-lap cars elected to pit with Custer the first off pit road, followed by Allgaier, Cindric, Zane Smith and Reddick.

The race returned to green on Lap 219 with rain continuing to threaten around the track.

Just after taking the green flag, Noah Gragson and Kaz Grala got together in Turn 1 to immediately bring the caution back out. Custer remained in the lead on the restart on Lap 225.

Cindric went to the outside of Custer into Turn 1 on the restart and grabbed the lead for the first time in the race.

With 20 laps to go, Custer returned the favor, passing Cindric entering Turn 1 to reclaim the lead.

Custer continued to hold a sizable advantage over Cindric with 10 to go.

Custer held off Cindric in a four-lap dash to take the Stage 2 victory.

Following the break between Stages 1 and 2, most of the lead-lap cars elected not to pit and Allgaier remained in the lead when the race returned to green on Lap 82.

With 60 to go in the second stage, Allgaier held nearly a second lead over Bell but Bell was again gaining ground. Custer ran in third.

Allgaier was able to increase his lead to more than a second over Bell with 40 laps remaining in the second stage. Custer remained in third, Nemechek was fourth and Gragson was fifth.

With rain in the area, the pressure was on for Bell to get to Allgaier but Allgaier continued to maintain about a half-a-second lead with 25 laps to go.

On Lap 127, Jeremy Clements appeared to blow his engine on the backstretch to bring out another caution. About the same time a light rain began falling around the track.

Most of the lead-lap cars elected to pit but Allgaier and six others remained on the track. Custer was the first off pit road and lined up fourth. The race returned to green on Lap 138.

Custer got around Allgaier off Turn 2 on Lap 139 to reclaim the lead.

On Lap 142, Christopher Bell got spun in Turn 3 in front of Gragson to bring out a caution. Custer led the way on the restart with four laps to go followed by Cindric and Smith.

Allgaier held off Bell on a restart with five laps remaining to take the Stage 1 victory.

Custer was third, Gragson fourth and Nemechek completed the top-five.

Riley Herbst started on pole after qualifying was canceled due to rain and led the first two laps.

On Lap 3, Custer got around Herbst to take the lead for the first time as Allgaier moved into second.

With 60 laps remaining in the first 75-lap stage, Custer held a small lead over Allgaier with Bell moving up to third.

With 40 laps remaining in the stage, Allgaier maintained a small advantage over Bell, who had been gaining ground quickly on the leader.

Bell got around Allgaier on Lap 38 coming off Turn 4 to take the lead for the first time.

Bell had expanded his lead over Allgaier to more than two seconds with 25 laps to go in the first stage. Custer remained in third.

Mason Diaz spun in Turn 2 on Lap 64 to bring out the first caution of the race. Most of the lead-lap cars elected to pit with Bell the first off pit road. Annett remained on the track and inherited the lead when the race returned to green with five laps to go.

Less than a lap following the restart, Allgaier powered into the lead with Bell moving to second and Custer in third.

Justin Haley looks forward to having Elliott Sadler as a teammate