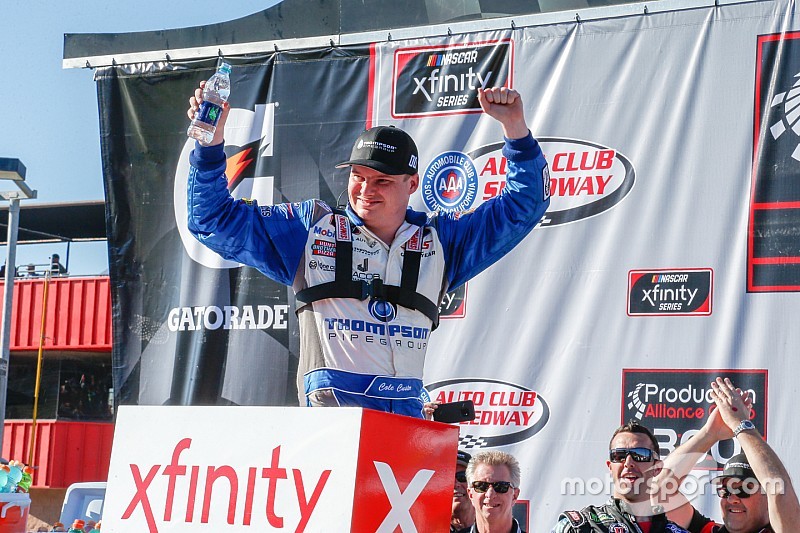 Cole Custer and a pit road miscue forced Kyle Busch to wait another day for NASCAR win No. 200.

The win is the third of Custer’s career and he becomes the first series regular to win at Auto Club since Scott Riggs won the event in 2002.

"This win means a ton," Custer said. "To start the year off with a new crew chief and new engineer, they just did a great job. We've just been trying to work through everything and we've gotten a little frustrated with ourselves.

"We wanted to run better than just top-fives and today we accomplished that. We had a great car. Just a great job overall. I'm so pumped - I've never won this early in the season so I'm going to be a little more relaxed then in past years."

In the process, Custer also denied Busch the opportunity to collect his 200th career NASCAR win on Saturday.

"Lack of grip there at the end," Busch said after the race. "We just didn't have the speed we needed with (Custer). Earlier in the day we were better than a lot of guys and at the end, we weren't. Our Supra was fast, just not fast enough at the end."

On Lap 84, John Hunter Nemechek spun after contact with Ryan Sieg and sent him sliding into the infield wall for a hard hit. “Yeah, I’m alright,” Nemechek said over his radio immediately after the race.

Under caution, most of the lead-lap cars elected to pit with Busch the first off pit road. On the restart on Lap 90, Noah Gragson, who stayed out, led the way followed by Busch, Reddick and Custer.

Busch, on new tires, quickly grabbed the lead from Gragson on the restart. But Custer got up alongside Busch and claimed the lead before the start/finish line.

The continued to swap the lead until Busch finally managed to establish a sizeable advantage with 57 laps left in the race.

Pole-winner Reddick was forced to pit under green on Lap 108 after making contact with the wall which caused a tire to go down.

Cindric spun on Lap 112 to bring out another caution. All of the lead-lap cars elected to pit with Bell the first off pit road. Busch’s team had trouble with the jack on his pit stop and he was also assessed a penalty for an uncontrolled tire and had to restart the race from the rear of the field.

On the restart with 34 laps to go in the race, Bell led the way followed by Custer, Briscoe, Allgaier and Jones. Busch restarted in 14th.

Custer quickly moved around Bell and into the lead after the restart.

With 26 laps remaining, Jones and Ryan Preece were involved in an incident that brought out another caution. All of the lead-lap cars pit again for new tires and this time Bell was the first off pit road.

Michael Annett and Gragson both stayed out and on the restart with 20 laps to go, they led the front row followed by Bell, Allgaier and Custer. Busch restarted in sixth.

Bell quickly launched into the lead on the restart. Custer, however, dropped below Bell in Turn 1 with 19 to go to move back out front.

With 18 laps to go, Busch had moved up to third, behind Custer and Bell. With 14 to go, Busch moved up into the runner-up position.

Busch led every green-flag lap on his way to a dominating performance in the Stage 2 victory.

“We’ve been working on the car all day, slight changes here and there,” Busch said during the break. “I feel like we’re pretty fast and I like my view.”

Following the break between Stages 1 and 2, Busch was the first off pit road and continued to hold the lead when the race returned to green on Lap 42.

Preece, driving JR Motorsports’ No. 8 Chevrolet this week, made contact with the wall shortly after the restart but there was no caution.

Allgaier moved up to third on Lap 46 as Reddick stayed within striking distance of Busch in second.

With 20 laps remaining in Stage 2, Busch maintained about a 1-second lead over Reddick with Allgaier still running in third.

On Lap 52, Nemechek was forced to make a green-flag pit stop after reporting a vibration. He had a loose left-rear tire.

With 15 laps remaining in the stage, Busch’s lead over Reddick remained about the same with Allgaier more than two seconds behind the leader.

Gragson had to pit under green on Lap 62 for a right-front tire going flat.

After starting the stage trading the lead with Reddick, Busch moved out to a comfortable lead for the Stage 1 victory.

Custer was third, Allgaier fourth and Gragson completed the top-five.

“Hopefully, we made the right adjustment. It’s a little treacherous up against the wall for me right now,” Reddick said during the break. “Hopefully, we can keep up with (Busch).”

Reddick started from the pole and he and Busch swapped the lead before Reddick moved out to a comfortable lead on Lap 5.

With 25 laps remaining in the first stage, Reddick held a small lead over Busch while Bell had moved into third. They were followed by Custer and Allgaier.

One lap later, Busch went to the inside and retook the lead from Reddick.

On Lap 17, Custer had moved up to third while Reddick remained in the runner-up position and about half-a-second behind Busch.

With 15 laps left in the first stage, Busch had opened a 1.3-second lead over Reddick. Custer ran third, followed by Allgaier and Bell.

Busch had opened up a more than 2-second lead over Reddick with 10 laps to go in the stage. Custer remained in third, about 7 seconds behind the leader.

Busch’s lead over Reddick expanded to more than four seconds with five laps remaining in the stage.