MOORESVILLE, N.C. (February 12, 2014) - It was announced today that Danica Patrick will pilot Turner Scott Motorsports' (TSM) third entry in the NASCAR Nationwide Series (NNS) race at Daytona International Speedway. Patrick, who will compete in her second full-time season in the NASCAR Sprint Cup Series (NSCS) in 2014, will be behind the wheel of the No. 30 Florida Lottery Chevrolet Camaro in the season-opening DRIVE4COPD 300. Veteran crew chief Mike Greci will once again be calling the shots from atop the pit box.

Patrick made her TSM debut in last year's season opener and surged to an early lead before an electrical failure forced her to retire early and resulted in a 36th-place finish. The former IndyCar driver made her Nationwide Series debut at the 2.5-mile superspeedway in 2010 and has six previous NNS starts in Daytona, with a best finish of 10th (July, 2011). Patrick has three top-five NNS starts at the Daytona Beach, Fla. track, including one pole award, which she earned in the first race of the 2012 season. Patrick also earned the NSCS pole in the February event at the track in 2013, ending the race with a solid eighth-place finish. 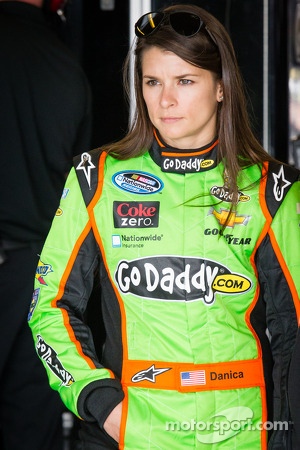 Patrick, who is the first woman in history to win an IndyCar race, has raced in a total of 60 NNS events, completing one full-time season in 2012. The Roscoe, Ill. native also earned the NASCAR Nationwide Series Most Popular Driver award following her first full-time NNS campaign. In her first full-time season of NSCS competition, Patrick finished the season with one top 10, one pole and was running at the finish of 31 events. Patrick will be sponsored by the Florida Lottery for the event, which has partnered with TSM in the past with drivers Ben Kennedy, James Buescher and Nelson Piquet Jr.

"Danica Patrick's immense popularity allows the Florida Lottery to increase awareness about our sole reason for existing - which is increasing funding for education in Florida," said Florida lottery Secretary Cynthia O'Connell. "In our 26 year history, Florida Lottery players have generated more than $26 billion for education programs and more than 650,000 students have attended college through the Bright Futures Scholarship Program. We are proud to partner with Danica and Turner Scott Motorsports and are hopeful for a successful weekend at Daytona International Speedway."

"I'm really looking forward to competing in the Nationwide Series race at Daytona once again and driving the No. 30 Florida Lottery Chevrolet Camaro," said Patrick. "Turner Scott Motorsports is a great organization and I worked really well with Mike Greci and the whole team in both of the races I did with them last year. I know that I'm definitely capable of a win this year working with that group, it just comes down to making it until the end. I have to thank the Florida Lottery for coming on board; they're giving me the opportunity to run this race and to support education in the State of Florida."

"We are so happy to announce that Danica will be returning to TSM in Daytona," said team co-owner Harry Scott Jr. "We think a lot of Danica and she was a very strong competitor in both of the races that she ran for us last year. Restrictor-plate racing is tough, but she's shown a lot of skill at Daytona in the past. I have no doubt that she has everything it takes to bring our car to victory lane.