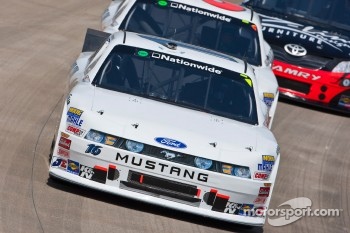 Much has been made about the improved Ford Racing performance in the NASCAR Sprint Cup Series and some of the credit goes to the FR9 engine, which debuted on a full-time basis last June. Equally impressive in 2011 has been the way the new Nationwide version of the FR9 has run. Carl Edwards has won two of the last three series races, including last weekend in Nashville, and Ricky Stenhouse, Jr. is tied for the points lead going into Friday night’s race at Richmond International Raceway. Ford Racing engineer Dave Simon took a few minutes earlier this week to talk about the development of the FR9 Nationwide engine and how it has done since debuting at Daytona in February.

DAVE SIMON, Ford Racing Engineer – HOW HAS THE FR9 NATIONWIDE ENGINE PERFORMED SO FAR IN YOUR OPINION? “When we started the FR9 Nationwide program, we were already starting with a developed Cup FR9 as a baseline, so the Nationwide engine sort of had a head start in terms of the development of the engine and basically took the Cup FR9 and adapted it to the Nationwide Series. When we started with the FR9 in Cup, we pretty much started from nothing. We had to develop the package over a long period of time, whereas with the Nationwide package we were able to achieve some pretty significant performance gains relative to the old Nationwide engine in a very quick amount of time. It was a really quick process to get it ready to go this season, and it’s been a part of the performance increase we’ve seen in Nationwide. I know there have been a lot of improvements on the car side as well, so it’s all part of the bigger package.”

...we were able to achieve some pretty significant performance gains relative to the old Nationwide engine in a very quick amount of time.

WHAT ARE THE DIFFERENCES BETWEEN A CUP FR9 AND NATIONWIDE FR9? “The rules require certain changes. The carburetor size is different. The Nationwide engines run a tapered spacer, essentially they’re somewhat restricted, where the Cup engines are only restricted at Talladega and Daytona. And they run a different style camshaft or a different style lifter, which is a roller lifter, whereas the Cup engines are a flat tappet lifter, so there’s a fairly significant power difference between the two engines. Beyond the components that have to be different by NASCAR’s rules, the rest of the engine is tailored towards the lower power output of the Nationwide engine, so you don’t have to run some components that are tailored to the Cup engines -- you can run some lighter weight components in the Nationwide engines. Now, the one complicating factor in the Nationwide engines is that a certain number of them have to be run multiple times every season, so you do have engines that run multiple races, whereas you don’t in the Cup Series. Then again, the Nationwide races aren’t quite as long as the Cup races, so the total mileage isn’t that much greater, but another factor that you have to consider is that you have to keep some of these engines sealed.”

WHAT’S THE FEELING LIKE WITH TWO WINS IN THE SERIES THIS SEASON AND THE POINTS LEADER DRIVING A MUSTANG? “There’s a lot of satisfaction in it, especially after coming from 2009 and 2010, which were admittedly not the greatest seasons for us. The guys in the shop, and everyone involved, really worked very hard over the last few seasons and you’re starting to see the fruits of that labor. There’s a lot of satisfaction in seeing the on-track results match up with the effort that’s being put in during the week and there’s a little extra bounce in everybody’s step for sure.”