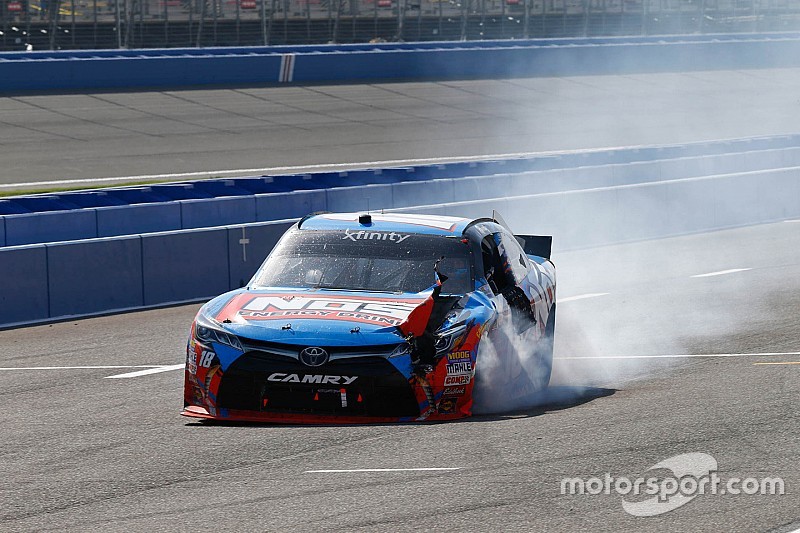 Unbelievable. That is the only proper way to describe the finish to today's NASCAR Xfinity Series race.

Kyle Busch led 133 of 150 laps, but it was Austin Dillon who came home with the trophy in Fontana.

Busch appeared to be on his way to his fourth consecutive Xfinity Series win this season — and his seventh victory in 10 starts at Auto Club Speedway when he blew a left front tire entering Turn 1 on the final lap of the race.

Dillon, who was running fourth in the closing stages, capitalized on Busch’s misfortune along with Erik Jones and Daniel Suarez running out of gas in the final two laps to win the race.

“Man, that was fun,” Dillon said. “I just had to thank the Lord above for putting fuel in the car. What a day. I just can’t believe it. This Chevy was a solid fourth-place car and to come to Victory Lane. I knew I had to stay in it, just let ‘er rip off of four and it worked out for us.”

“Oh man, that was close,” said Suarez, who maintains a 10-point lead in the NXS standings over Sadler.

For Wallace, the top-finishing full-time NXS driver, the third-place finish was his first top-five of 2016. He later failed tech in the Laser Inspection Station (LIS).

“This is a great day for us,” Wallace said. “Coming off practice yesterday we were kind of up in the air about what we wanted to do to this car, but we all put our heads together and really dug deep to pull out the speed in this car because it definitely didn’t have it. To come out of here third, I wouldn’t have told you that yesterday, so it’s a good day for us.”

On three wheels, Busch did his best to hold off Dillon coming to the line. But Busch ran out of fuel and the driver of the No. 2 refused to relinquish his spot.

“(My spotter) knew (Kyle) was going to try to wreck me,” Dillon added. “But we had fuel and he couldn't stop that.”

Busch held on to finish second, followed by Darrell Wallace Jr., Suarez and Elliott Sadler. Suarez, who started from the pole momentarily took the lead from Busch on the final lap but ran out fuel on the back stretch.

“Oh man, that was close,” said Suarez, who maintains a 10-point lead in the NXS standings over Sadler.

Dillon, 25, scored his first win at ACS and his seventh career victory in 102 NXS starts. His margin of victory was 0.715-seconds over Busch.

"Well, I just had to stay focused,” said Dillon, who was aware of Busch’s tire woes. “I was worried about our fuel and stayed focused on that the whole time. He tried to screw me right there at the end but it didn't work out for him, did it?

“I'm proud of these guys. Man, that was fun. I didn't think we had a car to do that and we didn't, but we did what we had to do to win the race."

The race was slowed by four cautions for 16 laps. Ryan Preece spun in Turn 4 on Lap 10. On Lap 30, David Starr’s engine failed but not before he could exit the track. Ray Black Jr. spun in Turn 4 to ignite the third caution while BJ McLeod’s No. 78 Ford.