After three-consecutive second-place finishes in NASCAR Nationwide Series competition, Carl Edwards made it over the hump to drive his No. 60 Roush Fenway Racing Ford to victory lane following the Alliance Truck Parts 250 at Michigan International Speedway on Saturday. 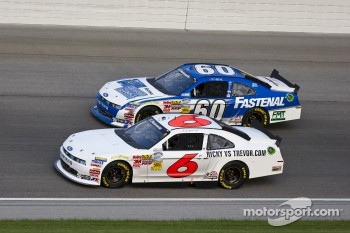 Edwards’ win was the 21st win for Roush Fenway Racing and the fifth in Nationwide competition for the organization at MIS. Crossing second was his teammate Ricky Stenhouse, Jr. followed by Kyle Busch in third.

Martin was able to complete his stop and get back out on the track without losing a lap. Most of the cars that had pitted under green got caught a lap down, and the cars that hadn’t yet pitted came down pit road under caution, cycling Martin up to the first position for the restart.

I thought Ricky was setting sail.

Martin got passed soon after the restart as Edwards and Busch, driver of the No. 18 Toyota for Joe Gibbs Racing, made it a three-wide race for the lead and Martin ended up being the one shuffled back.

Edwards’ RFR teammate Stenhouse got his No. 6 car past Martin and then by Busch to race his teammate for the top spot.

Stenhouse took the lead from Edwards with 22 laps to go and began to pull away slightly.

Edwards got back by Stenhouse with eight laps to go and led the rest of the way to the checkered flag. Stenhouse held on to second to claim the third one-two finish for Roush Fenway Racing in the last four races.

“It was a good one-two finish for Jack,” Stenhouse said. 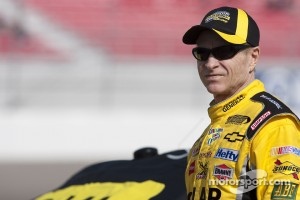 As Edwards and Stenhouse battled for the lead in the final laps, Busch raced Paul Menard, driver of the No. 33 Kevin Harvick Inc. Chevrolet for the third spot. Busch won that battle to claim a third-place finish.

Menard finished fourth and another Roush Fenway Racing driver, Trevor Bayne in the No. 16 Ford, rounded out the top-five.

Martin was shuffled back to the seventh spot by the end of the race, finishing just behind Busch’s Joe Gibbs Racing teammate, No. 20 Toyota driver Joey Logano, who finished sixth.