With the NASCAR Nationwide Series drawing to a close on Saturday with the running of the Ford EcoBoost 300 at Homestead-Miami Speedway most of the attention is on the No. 6 Roush Fenway Racing Ford of Ricky Stenhouse Jr. and the No. 2 Richard Childress Racing Chevrolet of Elliott Sadler. The two drivers are one and two in the series driver championship points standings, with Stenhouse having a 20-point lead over Sadler. A championship for Stenhouse would be the second in a row. One for Sadler would be his first in NASCAR national level competition.

But there's another championship fight going on in the series -- the one for the owner's championship. Often times in the Nationwide Series, unlike in the Sprint Cup Series, the driver champion and the owner champion aren't from the same organization since there's usually a top level team or two that rotate a handful of top-notch drivers, usually Sprint Cup Series regular, in and out of the seat of one of their Nationwide rides. 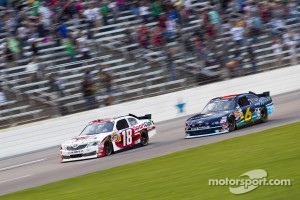 Joe Gibbs Racing utilized that method of seat-filling this year for it No. 18 Toyota, with the most productive driver of the car being Joey Logano. Despite only running a partial schedule in the series this year, Logano has claimed the most wins in the series with nine trips to victory lane. On the strength of Logano's performance, JGR is on track to become only the second organization to claim four owner's championships in the series. Richard Childress Racing is currently the only organization with four.

"With the very few attempts we've had, it means a lot," No. 18 crew chief Adam Stevens said. "It just shows you how strong this team and how capable Joey Logano is."

It only makes sense that JGR put Logano in the No. 18 for the season finale. In his final Nationwide race of the season, Logano only needs to finish 28th or better to lock up a fourth championship for the Gibbs organization. If he leads at least one lap, the necessary finish drops to 29th. The No. 18 team's closest competition is the No. 6 of Stenhouse.

With the No. 18 practically a shoe-in for the owner's championship, focus shifts back to the driver's championship battle between Stenhouse and Sadler. In the case of that championship, Stenhouse, with the 20-point lead, of course, has the upper hand. He can clinch his second-consecutive championship in the series, regardless of Sadler's performance, with a race finish of 17th or better. If he manages to lead at least one lap, he'll only have to finish 18th or better to guarantee the crown.

"With our success on intermediate tracks this season, I feel confident that we will have a strong showing at Homestead in our No. 6 Cargill Beef Ford," Stenhouse said.

And Stenhouse, statistically speaking, has performed better than his counterpart at Homestead-Miami. Stenhouse only has two previous Nationwide starts at Homestead under his belt, but in those two starts, he's managed an average finish of third, compared to Sadler's 12th.

"Although we head to Homestead with a deficit, we are not out of this championship," Sadler said. "We will fight until the end. We have to finish off what we started, and we are as prepared as we need to be to go out there and make it happen."

Needless to say, it looks like Stenhouse and Joe Gibbs Racing with Logano are the two to beat come Saturday, but anything can happen. Don't start engraving either trophy just yet.

"We have a 20-point advantage but we still have to have a solid performance to win the championship," Stenhouse's crew chief Mike Kelley said. "We’ve had a lot of success on intermediate tracks this season. We are bringing the same car we won with in Kansas so if we execute on pit-road and stay out of trouble I feel confident that we can get our No. 6 Cargill Ford into victory lane.”