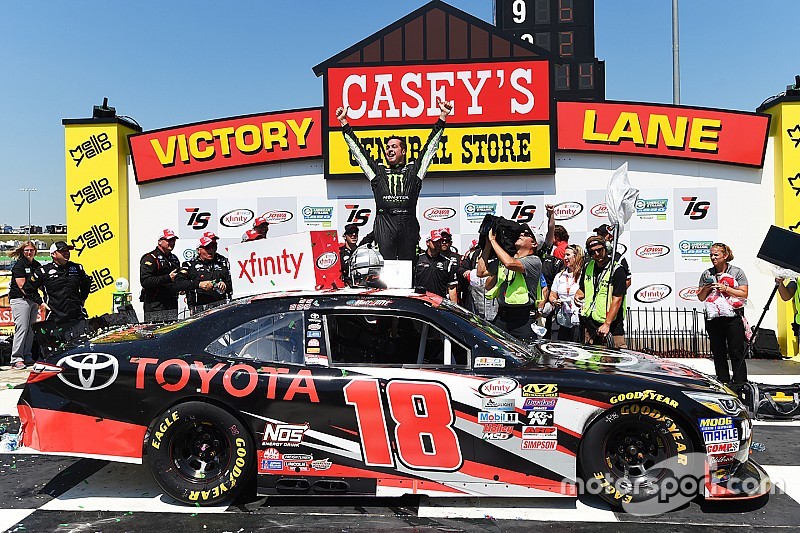 After winning Sunday’s Xfinity Series race at Iowa in his first start of the season, what’s next for Sam Hornish Jr.? Even he doesn’t know.

Hornish, the former IndyCar series and Indianapolis 500 champion, entered the 2016 season without any NASCAR ride. In fact he has most recently worked as a substitute teacher in Ohio.

Only recently did Hornish’s name come up in NASCAR again, when Richard Childress Racing announced he would drive its No. 2 Chevrolet in the Xfinity Series in the July 30 race at Iowa and Sept. 24 at Kentucky.

Then this past Monday, Joe Gibbs Racing called with another offer – drive its No. 18 Toyota in Sunday’s Iowa Xfinity race. That turned into his fourth career victory.

“For me what today really means is that I had the opportunity to take my kids to Victory Lane, which is really what I have wanted to do since I first became a dad,” Hornish said Sunday at Iowa Speedway. “I don’t know what it’s going to hold. I don’t know that it’s going to mean anything.

“Really, for me, it doesn’t have to mean anything. The best part of my life is sitting here and out there (his children). So, I’ll work but I won’t sacrifice trying to do the right things by them.”

Hornish’s NASCAR career has been filled with many ups and downs. He’s struggled in different opportunities in the Sprint Cup Series, but found his greatest success in the Xfinity Series.

Running with Team Penske at the time Hornish won a race and finished a career-high second in the series standings in 2013. His career-best Cup finish came in the 2009 season, when he was fourth at Pocono.

“A lot of people told me, ‘Are you mad about where you’re at?’ And I said, ‘No, I’m getting to spend a whole lot of time with my wife and kids and do things with them that I hadn’t got to do,’ ” he said.

“If I get the right opportunity I’ll go out there and I’ll prove it was the right thing to do to wait. I’m just super appreciative for the opportunities that come along.”

After successful back procedure, Matt Tifft set for Xfinity return at Daytona