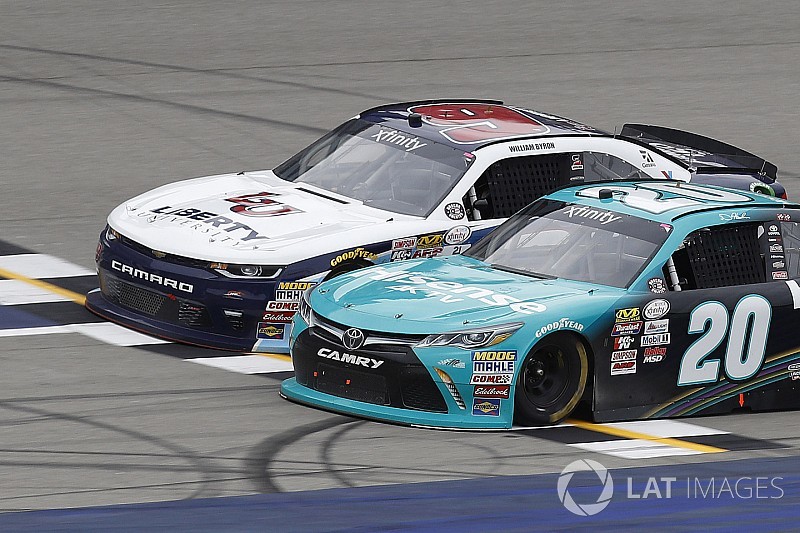 Hamlin scored his second NXS win at the two-mile track on Saturday and his 16th career Xfinity victory.

"The Camry was fast all day,” Hamlin said. “I didn’t want that caution at the end. Really proud of this team. The pit stops were awesome. It definitely feels good.”

For Byron, second-place was a career-best finish.

“We were so close,” Byron said. “It hurts to be that close and not get the win. We’ll get one soon. This is how we need to run and we’ll keep running like this.”

With 45 laps remaining in the race, Keselowski held the point with a five-car length advantage over Sadler. Hamlin, Byron, Ty Dillon, Menard, Busch, Reddick, Custer and Hemric rounded out the top 10. On Lap 82, Byron passed Hamlin just prior to the fifth caution was called for debris in Turn 1.

Keselowski had led 54 laps when he pitted on Lap 85. Sadler was second followed by Byron, Hamlin, Ty Dillon, Menard, Busch, Reddick, Custer, Ryan Reed, Hemrick, Poole, Ryan Sieg and Spencer Gallagher. Dylan Lupton was penalized after his jack man came over the wall too soon. Allgaier had an extended stop after his hood was flapping on the last run. The team taped down the hood and he dropped to 26th with 28 cars on the lead lap.

After the first lap, Hamlin held the point with Dillon second, Keselowski third and Custer fourth. Menard passed Custer on the next lap and the No. 00 dropped to fifth followed by Byron, Sadler, Poole, Jones and Tifft.

On Lap 92, Keselowski moved up to second with the Richard Childress Racing Chevys of Dillon and Menard in tow. Byron ran fifth followed by his JR Motorsports teammate Sadler.

With 30 laps remaining, Hamlin held a 1.371-second lead over Keselowski. Twenty-seven cars were still on the lead lap. On Lap 102, Sadler, who took four tires on his pit stop, passed Ty Dillon for fifth.

Hamlin extended his advantage over Keselowski to 2.2-seconds with 20 laps to go. Menard was third followed by Byron, Sadler, Dillon, Custer, Poole, Busch and Tifft. Byron passed Menard on the next lap for third. Hamlin rolled out to a three-second lead with 15 laps to decide the contest.

“He did a great job and really I knew he had a really good car,” Hamlin said of Byron. “That last long run that we had, he was about to pass me, so he’s done a great job. Obviously, he’s one of NASCAR’s next future superstars and I wanted to race him clean. I wasn’t going to turn him around or anything like that, so stayed low below him and got him a little bit loose through 1 and 2 that allowed me to get position and then into Turn 3 we both got sideways, he slid up just enough to let me barely get to that left rear and it was just enough to drag race past him, so proud of this team. Great that we got a win.”

Shootout to the finish

Hamlin led the field to green with nine laps remaining in the race. With a push from Byron, Keselowski moved to the front but the No. 9 came dove low for the lead on Lap 117. Hamlin was second followed by Keselowski, Menard, Sadler, Dillon, Poole, Custer, Tifft and Busch.

Sadler passed Menard for fourth on Lap 118. Two laps later, Tifft, who had dropped to 12th, spun off of Turn 4 after Hemric took the air off of the back of his car. Byron had a half-second lead over Hamlin. Keselowski, Sadler, Menard, Dillon, Poole, Custer, Busch and Reed rounded out the top 10.

Byron held the point with two laps to decide the race. With a push from his teammate Sadler, he shot out to two-car lengths over Hamlin at the line. On the backstretch, Hamlin came on the inside of Byron and took the lead at the line.

“I wanted to race him clean, I didn’t want to push him,” Hamlin said of Byron.

There were 10 lead changes among five drivers. Keselowski’s 54 laps were the most led. Sadler extended his point lead by 21 over Allgaier.

A late-stage caution played into Elliott Sadler’s hands on Saturday as he rode to the Stage 2 win.

Sadler was running third behind Brad Keselowski and Denny Hamlin when NASCAR called a yellow for debris with three laps remaining in the stage.

Cole Custer led the field to green on Lap 38 after moving to the point with a two-tire pit stop between segments. Justin Allgaier and Brennan Poole were on the same strategy and restarted second and third, respectively. Denny Hamlin was the first car off of pit road on four tire and restarted fourth followed by Elliott Sadler, Brad Keselowski, Daniel Hemric, Paul Menard, Ryan Reed, Tyler Reddick and William Byron.

Before the first lap was completed, Brandon Jones spun off of Turn 2 and collected Michael Annett, Ben Kennedy, BJ McLeod, Dylan Lupton and JJ Yeley to ignite the third caution of the race.

Custer retained the lead followed by Allgaier, Hamlin, Keselowski, Sadler, Poole, Menard, Reddick, Ty Dillon and Hemric. Brandon Brown was the beneficiary when the race returned to green on Lap 44. There were 28 cars on the lead lap.

Custer led lap 45 with Keselowski, Hamlin, Reddick, Sadler and Poole in tow. Sadler moved up to fourth on Lap 46. Keselowski took the lead from Custer at the start-finish line on Lap 49. Hamlin followed to second in Turn 4. Custer remained third followed by Sadler, Reddick, Poole, Byron, Allgaier, Hemric and Menard.

With 10 laps remaining in the segment, Keselowski’s lead was 0.192-seconds over Hamlin. Sadler was third followed by Custer, Reddick, Byron, Poole, Allgaier, Menard and Hemric. Busch, who was the last car on the lead lap (P27) recovered to 17th.

Hamlin, the first car off of pit road, lined up 10th followed by Custer, Keselowski, Reddick, Byron and Hemric. Menard was penalized for improper fueling. Garrett Smithley had an uncontrolled tire. The stage ended under yellow. Sadler remained on the track while Poole, Allgaier, Gaughan, Koch, Jones and Chastain pitted.

He beat Denny Hamlin to the line by 1.725-seconds. Elliott Sadler, Paul Menard and William Byron rounded out the top-five finishers.

“I’m not really sure what happened there,” Kesleowski said of the start. “I got a little bit of a run and was trying to make a pass and it was too late.”

Keselowski ran into the back of polesitter Kyle Busch just as the leaders crossed the start line on the first lap. Busch was weaving back and forth and moved up the track while Keselowski was getting up to speed.

On Lap 15, Daniel Hemric, who had to start at the rear of the field for unapproved adjustments, was 20th. Ben Kennedy, who qualified 12th, but also dropped to rear after a tire change prior to the start moved up to 24th. Following repairs to the No. 18, Busch was also in the top 25.

Busch was back up to 20th with five laps remaining in the stage. Keselowski’s had nearly a two-second lead over Hamlin. Ty Dillon passed Custer for eighth.

Custer, Allgaier and Brennan Poole took two tires on the first stop to move to the front of the pack.