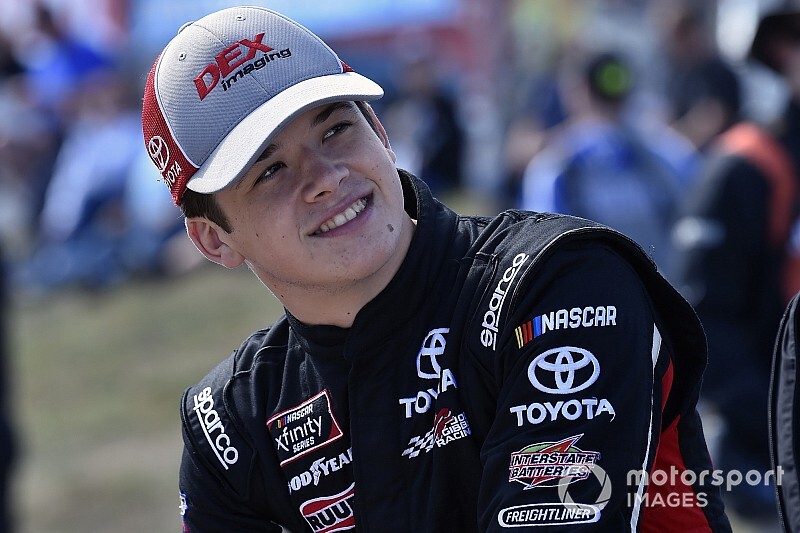 Harrison Burton is making the step up to the NASCAR Xfinity Series in 2020 with Joe Gibbs Racing.

Burton, the son of veteran Cup racer and current NBC Sports analyst Jeff Burton, will be piloting the No. 20 JGR Toyota Supra.

The car is currently occupied by Christopher Bell, who will move up to the NASCAR Cup Series in 2020 with Leavine Family Racing.

“I want to finish this season strong, but I’m excited to get 2020 started,” Burton said in a statement Thursday. “My time with JGR this season will really help me because I’ve already gotten to know so many people there and it’s such a great team and organization. They have a long history of helping to develop drivers and this is big for the next step in my career.”

The 19-year-old has made six starts in the Xfinity Series this year, finishing as high as fourth at Iowa Speedway.

Meanwhile, he has also been running for the Truck Series championship with Kyle Busch Motorsports this season, but failed to make the playoffs and has yet to reach Victory Lane.

He is a five-time winner in the K&N Pro East Series however, securing the 2017 title.

DEX Imaging will provide primary sponsorship for the car and a crew chief will be announced at a later date.

“As Harrison (Burton) moves up to the next level of his career, we’re happy to have him join JGR fulltime and go behind the wheel of the No. 20 Supra,” said Steve DeSouza, Executive Vice President of Xfinity Series and Development for Joe Gibbs Racing. “Harrison has continued to show progress this season in his limited starts and I know that will only continue to develop with more seat time while contending for the Xfinity Series championship.”