RAB Racing and driver Alex Bowman felt right at home Saturday for the ServiceMaster 200 at Phoenix International Raceway. Bowman from nearby Tucson, Arizona with primary sponsor Innovative Green Technology (IGT) and fuelxx™ from the Phoenix area battled through multiple restarts and avoided on-track incidents to finish in the 11th position. This was the best NASCAR Nationwide Series finish for Bowman at his home track. 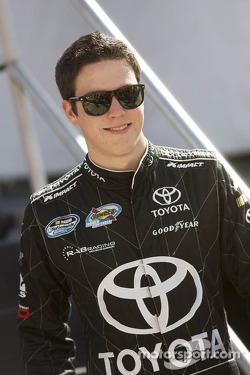 Friday began the team's first day of on-track activity with two practice sessions, and crew chief Chris Rice had a plan to optimize the two hours of track time. "We came into Phoenix with a completely different setup than we had in the spring, there wasn't one aspect of the car setup that we kept," said Rice. "The reasoning behind that was we had good speed for short runs in the Spring, but during a long run the car became increasingly tighter and hurt our performance. This track usually goes for long green-flag runs so this time we needed to revolutionize our car setup and bring something completely different to the track." This new strategy paid off as Bowman recorded the fourth fastest lap in the final-practice session, with lap times staying consistent as the tires lost grip over time. With this new setup, Bowman took a conservative approach to qualifying and recorded the 15th fastest lap.

The green flag flew on the 200-mile event and Bowman immediately made his way closer to the top-10, never falling below his 15th-place starting position. The only complaint from behind the wheel was that the No. 99 fuelxx™ Camry was a little loose on the entry of the corners. Crew chief Rice was able to improve the car on the first pitstop on lap 79, but chaos was right around the corner. In the span of just 60 laps there were six caution periods for debris and on-track incidents involving other cars. Bowman was able to avoid the multiple incidents and jumped from 14th to the eighth position in that 60 lap span. After a hard-fought battle with NASCAR Sprint Cup Series championship contender Matt Kenseth, Bowman was passed by a string of cars on the inside with less-than 20 laps to go. Bowman and the No. 99 team finished in the 11th position, their 18th top-15 finish in 32 races, also winning the Sunoco Rookie of the Race award for the highest-finishing rookie driver.

Alex Bowman: "I think we finally got the monkey off our back here at my home track of Phoenix International Raceway, but it still feels bittersweet. It's a bitter finish because this No. 99 team was capable of a top-10 finish and we showed it. We battled with the best drivers and cars in the business, but lost a few positions in the closing laps. With that said, it feels great to run well at my home track with my family and friends in the grandstands and win the Sunoco Rookie of the Race award. I've got to give credit to my crew chief Chris Rice for making the pivotal adjustment to tighten the car on the entry of the corners. Without that change I don't think we would have had a manageable race car with the consecutive restarts. If only this race was 300 miles I think we could have easily raced our way back into the top-10 and stayed there, but we just ran out of laps."