NASCAR Nationwide Series top-10 in the standings are separated by only 74 points as they head to the road course in the middle of Ohio.

With only 12 races remaining before a new NASCAR Nationwide Series champion is crowned, forecasting the outcome is becoming harder with every passing weekend. After Saturday’s race at Watkins Glen only 74 points separate the top-10 drivers in the standings – a difference that the 10th-place driver (Parker Kligerman) could conceivably make up in only two races, although not likely.

Adding to the uncertainty surrounding predicting a champion is the venue of the next race. The series makes its inaugural trip to the Mid-Ohio Sports Car Course in Lexington, Ohio, on Saturday for the Nationwide Children’s Hospital 200. The 2.258-mile, 13-turn road course is the second road course in as many weeks and the third and final one of the season.

Of the 42 drivers currently vying for a spot in the race, none are looking forward to the green flag more than Sam Hornish Jr., who grew up about 2-1/2 hours west of the track in Defiance, Ohio. 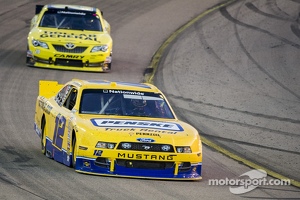 A win for Hornish, who is currently second in points three markers behind Austin Dillon, at Mid-Ohio in front of a hometown crowd would mean more to the 34-year-old driver than winning at any other track and would most likely return him to the points lead. In addition to having a home-field advantage, Hornish is also the only driver in the top 10 that has competed in a major national series motorsports event at the track. He finished 14th in the IndyCar Series race in 2007, a year prior to joining NASCAR fulltime.

In seven road-course races in the NNS, he has five consecutive top-five finishes and two poles, including a fifth-place finish at Road America in June and a runner-up performance last weekend at The Glen. This season, Hornish has one victory and five second-place showings in which he was the highest-finishing points-eligible series regular.

Dillon holds the points lead for the third week in a row, but his lead has shrunk to only three over Hornish. Two markers back is Regan Smith (-5) followed by Elliott Sadler (-12) and Brian Vickers (-18).

Racing on road courses requires a unique set of skills that don’t always translate well into for a driver groomed on the oval tracks common throughout North America. While some drivers competing fulltime in NASCAR’s three national series have proven they have the chops for both, others are what one would describe as road-racing specialists or “ringers.”

When the NASCAR Nationwide Series arrives at the Mid-Ohio Sports Car Course in Lexington, for the Nationwide Children’s Hospital 200 on Saturday afternoon, there will be plenty of road-course ringers on hand. 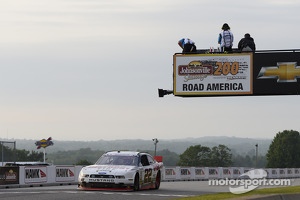 The eight have a combined nine victories, 27 top fives, 34 top 10s and seven poles at road courses on the NNS schedule. Ambrose and Fellows lead the way with four victories apiece, followed by Allmendinger, who posted his only NNS road-course victory earlier this season at Road America.

The Nationwide Children’s Hospital 200 at the Mid-Ohio Sports Car Course this Saturday will have a special meaning for 10 children who will see their faces and names navigating the track’s 13 turns.

That’s because 10 patient champions from the Nationwide Children’s Hospital in nearby Columbus, Ohio, were paired with drivers who are from or currently live near a participating patient’s hometown. Each patient and race team has collaborated to create a paint scheme depicting that child’s likeness or name.

Chad Hackenbracht, who will be driving the No. 44 Tastee Apple Inc. Toyota this weekend, will have the opportunity to drive in front of family and friends at Mid-Ohio. His hometown of New Philadelphia, Ohio, is about two hours away from the road course. … Tim Cowen of nearby Ashland, Ohio, is also entered in the race. If he’s makes the field, it will be his inaugural start in the series. … NASCAR Whelen Euro Series driver Anthony Gandon of Bayonne, France, will attempt to make his second national series start this Saturday.