Joe Gibbs Racing came out on top of NASCAR Nationwide qualifying after their three drivers teamed up against the other nine competitors in the final round.

In his first Nationwide start of 2014, Sam Hornish Jr. made a statement by earning the pole for Saturday's race at Talladega Superspeedway. He and Joe Gibbs Racing teammates Elliott Sadler and Darrell Wallace Jr. ran in formation and behind the main pack for a majority of the third round.

When they began to catch up, they gained a lot of speed via the effect of the draft and the result was a JGR 1-2-3 with Sadler 2nd and Wallace 3rd. Brian Scott, Ty Dillon, and Ryan Reed made a last ditch effort in the final seconds to overthrow the JGR fleet but failed to do so. It's the sixth career pole for the 2006 Indianapolis 500 champion. 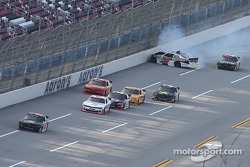 For Gibbs, it's their 90th pole in the Nationwide Series. Hornish's lap speed of 51.258 seconds (186.783mph) was just .002 thousandths quicker than teammate Elliott Sadler.

During the three round session, there was one major incident. In the first round, Kyle Larson attempted an aggressive move between Regan Smith and Tanner Berryhill. There wasn't quite enough room and Berryhill was sent spinning into the outside wall.

Chad Boat and Derrike Cope were the two drivers who failed to make the race.

How Supercars teams will race in a COVID-19 world

Kyle Busch gets win No. 100 in the NASCAR Xfinity Series

How Supercars teams will race in a COVID-19 world