DAYTONA BEACH, Fla. – When three-time NASCAR Late Model Sportsman national champion Jack Ingram was told the here, there and everywhere competition would transition into a more compact tour of 29 races in 1982, the Asheville, N.C., driver figuratively licked his chops in anticipation. 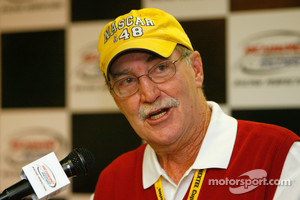 Later nicknamed “The Iron Man,” Ingram had run 86 races throughout the southeast – sometimes three and four times a week in as many different states – when he won the 1972 NASCAR Late Model Sportsman national title.

“When they made it to where you only had to go to 30 race tracks, it was like a vacation for us,” said Ingram of the then NASCAR Busch Series, now the NASCAR Nationwide Series. “I really liked the idea … it worked out well for me.” Yes it did.

Ingram captured the inaugural 1982 championship over cross-town rival Sam Ard with seven victories and 23 top-five and 24 top-10 finishes. He finished second to Ard in 1983-84 and fashioned a second title in 1985 with five wins. A two-race suspension kept Ingram from collecting a third championship the following season in which he finished third.

Over nine seasons as a full-time competitor, Ingram finished outside the top five in points just twice. He ultimately competed in 275 races winning 31, the latter figure a record until broken by Mark Martin in 1997. Ingram remains fifth in all-time NASCAR Nationwide Series victories.

Ingram won at least one race in six consecutive seasons along with five career poles.

All but two of those victories came on short tracks leading to Ingram calling himself, only half-jokingly, “the best short-track racer ever.”

Ironically, Ingram’s best racing memory was his victory in the 1975 Daytona Permatex 300, a race broadcast by ABC’s “Wide World of Sports.” Because the event was televised – a rarity in those years, especially for a late model sportsman event – Ingram received congratulatory letters from throughout the U.S. and even from fans in foreign countries.

Ingram’s car had two crew chiefs, NASCAR Hall of Famer Junior Johnson and Banjo Matthews. “We got a big crack in the top of the windshield, a big hole,” said Ingram. “They were going to black flag me. Junior said he would fix it and they believed Junior. Now, he didn’t fix it but he taped it up and they let me finish the race and we won and that was the best time of my whole racing career.”

That NASCAR Nationwide Series total doesn’t include the dozens of NASCAR points-paying late model sportsman features Ingram won during the 1960s and 1970s driving his No. 11 J.W. Hunt-sponsored Chevrolets on weekly tracks – many of them long-shuttered. It was not uncommon for a driver and a single crew chief / mechanic to race in Virginia on a Friday night, tow to Tennessee for a Saturday show and finish the weekend in North Carolina.

Ingram won 15 races and finished among the top five in 67 starts during his 1972 championship season. A year later, he won a second title by concentrating on national championship-designated events, winning 11 of 18 starts. His third crown was a runaway as Ingram held a 2,000-point edge over the late Butch Lindley at season’s end.

“One weekend, we ran Langley, Richmond, Manassas (Va.) and Kingsport (Tenn.) in the same car; maybe on the same set of tires,” said fellow competitor Jimmy Hensley of a typical weekend in NASCAR’s late model sportsman years. “Jack raced for a living. I’d work all day and race all night.

“He was tough to beat. He had good ability and was very competitive. He finished most of the races and rarely had breakdowns.”

“Jack’s record was phenomenal because he was the driver, crew chief, car owner and chief bottle washer on his team for most of his career,” said Jim Hunter, NASCAR’s late vice president of communications on Ingram’s 2007 induction into the International Motorsports Hall of Fame. “He was a no-nonsense, get-in-your-face, hard-nosed, fender-scraping racer who took no prisoners on the track.

“He raced other drivers however they raced him. Sort of ‘You wanna beat and bang? I’ll beat and bang with you. You want to race hard but clean? I’ll do that, too.’ (But) in spite of his hard-nosed temperament, Jack was and still is very popular among his peers.”

“He was very dedicated to the sport … dedicated his life to it and even after he quit driving he continued to help others along the way,” said NASCAR Hall of Famer Ned Jarrett in a 2013 interview with NASCAR.com’s Kenny Bruce.

Ingram was named one of NASCAR’s 50 Greatest Drivers in 1998.

Dylan Kwasniewski to compete full-time in 2014