· A LITTLE REDEMPTION AFTER DAYTONA: Logano is looking forward to returning to the restrictor-plate track of Talladega Superspeedway this weekend, especially after his strong run at Daytona to open the year in the No. 20 GameStop Toyota. Logano led for a total of 22 laps in Daytona and was considered the car to beat, along with Joe Gibbs Racing teammate Kyle Busch, heading into the final laps. Logano and Busch hooked up in the two-car draft and were heading to the front on the white-flag lap, with Busch pushing Logano into the lead, when Busch’s front bumper hooked Logano’s rear bumper and forced the No. 20 into the wall. Logano limped around to finish 12th in the event. 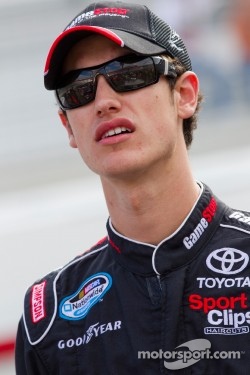 · CHASSIS: The JGR team will take chassis #20129 to Talladega this weekend. The chassis is new, built this year in the JGR shops in Huntersville, NC. The team was originally planning to take chassis #20105, but it was heavily damaged in the wreck at Daytona. Chassis #20103 will serve as the team’s backup.

“I really feel like Talladega owes me one after the last two years there. We’ve pushed the eventual winner to the victory the two years in a row now, so maybe this year, it’s my turn and someone will help push me and the No. 20 GameStop Toyota to the victory. I mean, it’s cool to be able to help someone out, especially my good friend David Ragan a couple of years ago, but I want to get my first victory at a restrictor-plate track.

“I really like restrictor-plate racing and I feel like I’ve gotten pretty good at it since I started. I’ve run really well in everything I’ve driven at Talladega, from my Cup car to the Nationwide car, Truck Series and even in ARCA. I’ve just never been able to get a win. I have learned a lot about racing in the draft and what moves to make and when to make them. There is an art to it for sure. It is a little different though in the new Nationwide Series car with the two-car draft. That two-car deal is very important. But we showed in Daytona that we are good in the draft and if you get hooked up with the right person, you can get to the front. Hopefully, this will be our year at Talladega. I’d love to get Adam and all of the new guys on the No. 20 team into Victory Lane.

“I got a chance to see the Talladega car with the Mortal Kombat paint scheme on it in the shop and it looks sick. It will be a nice change from the red and black car we’ve run the first few races of the year. It will stand out for sure. I think the fans are going to love it. The thing is so detailed, especially when you see it up close. People walking around in the pits and on pit road before the race will stop and look at the car. It’s a car that will look awesome in Victory Lane photos, so hopefully, we can get it there.”

“Everyone knows what to look out for at Talladega, which is the importance of the draft and staying out of the big wreck. Talladega is one of those tracks where, as a crew chief, there isn’t quite as much to do to the car as there is at most other tracks. We still have to make the right adjustments and get the car handling the best we can, but the draft has such a different effect on the cars. So, the best we can do is get the car as comfortable for Joey as we can and then let him go out there and do his thing in the race. It’s not that making the right adjustments, be it wedge or air pressure, isn’t as important, but handling isn’t the biggest thing at places like Talladega and Daytona. It’s more aero and speed.

“I feel like our superspeedway program is right there. Both our team and the No. 18 team (with driver Kyle Busch) ran really strong at Daytona. Unfortunately, we weren’t able to get the finish that we should have, but we were right there fighting for the lead at the end. So much of these races comes down to who you are hooked up with and who can push who. Hopefully, Joey and Kyle can get hooked up like they did at Daytona and get the Gibbs cars up front. We’ll see how it all shakes out come Saturday, but I know we’ll be right there in the thick of things again.”