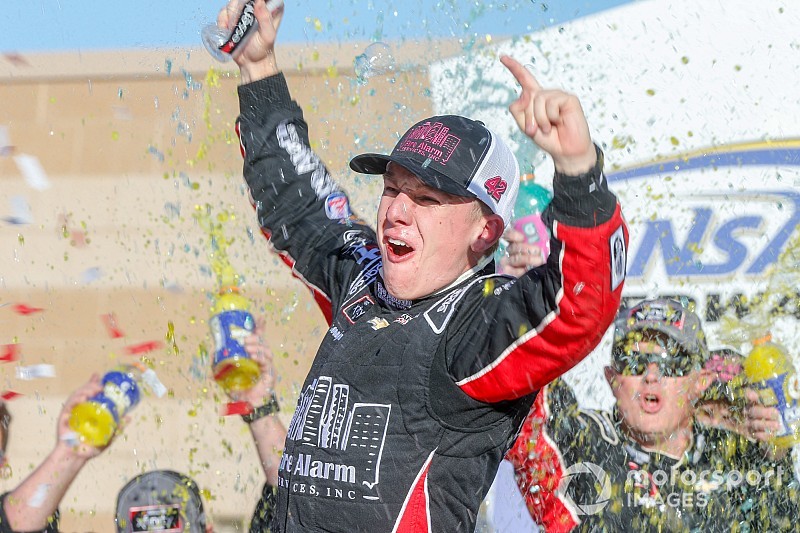 John Hunter Nemechek grabbed his first NASCAR Xfinity Series win in a race that vastly changed the landscape of the series’ playoff picture.

The win is the first for Nemechek in the series in his 15th start. He has been running a partial schedule with Chip Ganassi Racing this season in the No. 42 Chevrolet.

The win also comes at the site of his father, Joe Nemechek’s, final win in the NASCAR Cup Series.

"This means a lot, especially at Kansas. In 2004, I forgot how old I was, but dad swept the weekend in the Xfinity and Cup series. It's pretty special," Nemechek said in Victory Lane. "Thanks to Chip Ganassi for giving me this opportunity.

"I knew I messed up (overshooting my pit stall). I had done that once earlier this year and they told me not to think about, just go out there and do my best. When that last caution came, I knew we had a chance.

"Daniel and I raced hard together all day. We got the track position and this thing was on rails at the end. I feel like we've been contending for wins all year. We just hadn't pulled through. To check the first one off - that's the hardest one to get - hopefully now we can go on and we're racing for an owner's championship in Homestead."

The race got off to a rocky start with a wreck on Lap 1 that collected four playoff contenders. With two races remaining in the semifinal round, title favorites Christopher Bell and Justin Allgaier find themselves below the cutoff line to advance to the Championship 4.

Nemechek, 21, had to overcome his own issues during the race, once overshooting his pit stall and pitting a second time late for loose lug nuts.

“I was unbelievably loose on that whole last run,” Hemric said. “I’m not sure what happened. It just wasn’t meant to be I guess. It will happen when it happens, just not today.”

Following a round of green-flag pit stops with 50 to go, Hemric opened up a more than 3-second lead over Nemechek, in part due to Nemechek overshooting his pit stall during his stop.

With 40 laps remaining, Hemric continued to hold a 3-second advantage over Nemechek. They were followed by Reddick, Sadler and Matt Tifft.

A caution was displayed with 36 to go when Vinnie Miller’s car stalled on pit road. Most of the lead-lap cars elected to pit and Sadler was the first off pit road thanks to a two-tire pit stop. Matt Tifft stayed out and led the way on the restart with 32 to go.

Sadler quickly moved into the lead after the restart as Hemric moved into second.

With 31 to go, Hemric went to the outside of Sadler and retook the lead. With 30 to go, Nemechek went low and took the lead from Hemric.

With 10 laps remaining, Nemechek had moved out to a more than 5-second advantage over Hemric.

Nemechek took the Stage 2 win under caution when a late-stage wreck collected Ryan Preece, who was running third at the time.

Following the break between Stages 1 and 2, Hemric was first off pit road and remained in the lead on the restart on Lap 52.

On Lap 57, a caution was displayed after Ja Junior Avila got loose while running three-wide and spun out. The race returned to green on Lap 61 with Hemric still out front.

Nemechek was able to power around Hemric on the outside to grab the lead through Turns 1 and 2 shortly after the restart.

With 10 laps remaining in the stage, Nemechek held a small lead over Hemric. They were followed by Preece, Reddick and Sadler.

With five to go in the stage, Nemechek had moved out to more than a one second lead over Hemric.

With two laps to go, Joey Gase got into Garrett Smithley and the two collected Ryan Preece in the incident which placed the race under caution. Preece was running third at the time.

Hemric held off a furious charge from Nemechek to claim the Stage 1 win.

Hemric started on the pole but the field had not even gotten through Turns 1 and 2 on the first lap when Allgaier got loose and slid up and into Bell, which triggered a multi-car wreck and damaged the fortunes of several playoff drivers.

Also involved and receiving serious damage were Austin Cindric, Cole Custer, Michael Annett and Spencer Gallagher. Allgaier immediately took his No. 7 Chevrolet to the garage, his day done. Cindric and Bell were also unable to continue.

“That was a pretty big hit, bigger than what I was expecting,” Cindric said. “It’s just unfortunate. It looks like just a racing deal there – (Allgaier) got loose under (Bell) and cleared out a few of us up front.

“I’m thankful to still be in the playoffs and still have a shot. I felt like we had a shot to win today. We’ll move on, have a week to think about it, go to Texas. Looks like we’re going to have to win (to advance).”

Allgaier took responsibility for the incident.

“That one’s on me. I’m super disappointed for everybody involved,” he said. “Not only did we wreck our day but a lot of the other competitors. Hate it for those guys. Hopefully we can get to Texas next week and rebound from it.”

When the race returned to green on Lap 12, Hemric continued to lead followed by Jones and Reddick.

Before the completion of another lap, Brandon Jones got loose and ended up slamming into the wall to bring out another caution. The race tried another attempt to return on green on Lap 17.

On Lap 25, Gallagher appeared to blow a tire entering Turn 1 and hit the wall to bring out another caution. Hemric remained in the lead on the restart on Lap 34.

With 10 laps remaining in the first stage, Hemric maintained a small lead over Nemechek with Preece close behind in third.

The cars of Ross Chastain and Alex Labbe had to start the race from the rear of the field as each made an engine change.