© 2021 Motorsport Network. All rights reserved.
TV Buy tickets Store
Previous / Bill Elliott: "I feel like I hit everything but the lottery" in return Next / Ben Kennedy "possibly" interested in one day being NASCAR CEO
NASCAR XFINITY / Interview

Justin Allgaier's career-best Xfinity season is far from over

Justin Allgaier has had a remarkably successful career in the NASCAR Xfinity Series but it’s never been as good as this year. 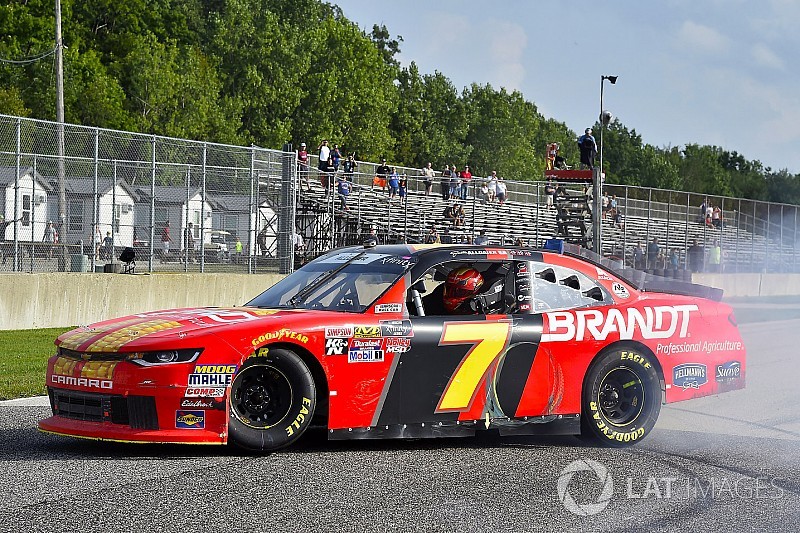 With 10 races still left in the 2018 season, Allgaier already has set career-bests in wins (four) and laps led (518) and has tied his career-high in top-five finishes (13).

He is on a steady path toward winning the regular season championship and entering the series playoffs as the No. 1 seed.

In an Xfinity career that has never seen him finish worse than sixth in the series standings in seven previous fulltime seasons, Allgaier and his No. 7 JR Motorsports team are still finding ways to raise the bar.

“I’ll be honest with you, there was a point in my career when I was ready to check out and not run a race car again in my life,” Allgaier said Saturday following his victory at Road America. “You know, I was done and I was over with.

“Driving great race cars and having great people behind you makes a big difference. From my standpoint, this may not be the biggest race team, we may not have the biggest budgets, and we may not do everything right each and every week.

“But just like today, we did everything we know how to do and we never gave up and put ourselves in position and it worked. That has been for all of our wins this year, really.”

Saturday’s win was Allgaier’s second this season on a road course and three of his nine career wins have now come on road courses.

He led on a restart on Lap 39 of 45 of Saturday’s Johnsonville 180 but James Davison grabbed the lead as the two battled through Turn 1. Allgaier reclaimed the lead in Turn 7 of the same lap as Davison went wide.

Allgaier’s advantage grew immensely when Davison and Justin Marks both ran off course while racing for the second position with three laps remaining, allowing Allgaier to move out to a big lead over Matt Tifft and cruise to victory.

“When you build fast race cars and you see the time and effort put in at the shop, it goes a long way,” Allgaier, 30, said. “From a driver’s standpoint, when your stuff’s good, you feel like you can go out there and push it.

“Whether we go to Homestead and win the championship or not, this has been by far the most gratifying season for me, not even from a win standpoint. I feel like we’ve run better – the No. 7 car as a group – we’ve run better everywhere.

“There’s not been a race track we’ve been to this season where we didn’t battle for the win or run in the top three. We definitely have stepped it up.”

Ben Kennedy "possibly" interested in one day being NASCAR CEO