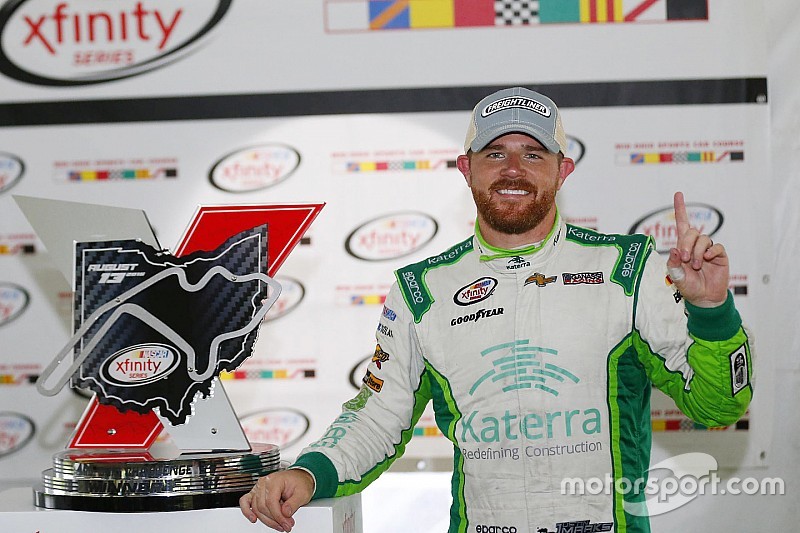 Justin Marks survived the carnage and treacherous conditions to take his first victory in the NASCAR Xfinity Series.

The race started with pole-sitter Sam Hornish Jr. in control. Shortly after the green flag, the race was put under caution for inclement weather.

Teams were given the opportunity to switch to rain tires before the race got back underway. Australian Owen Kelly moved into control of the race, but only briefly as he spun all on his own.

Marks asserted his position at the point of the field early on, leading 43 of 75 laps.

Marks led the way for a restart just prior to halfway (Lap 32), and carnage ensued directly behind him. While running second, road racing veteran Andy Lally got tagged by Erik Jones and both spun. Nelson Piquet Jr. was taken out of the race in the melee.

Lally opted to be the first driver to jump on slick tires. He charged back through the field and even led three laps as other frontrunners followed suit.

Once Lally pitted again, a four-way scramble for the lead took place. Ryan Blaney, Ty Dillon, Wallace and Marks were all part of the fray.

Under a caution with just over 20 laps to go, the rain returned and the field pitted for another set of wets. Marks led Blaney on the following restart while chaos ignited around the entire track. Cars spun and ran off track at all corner of the circuit. Even under yellow, drivers ran into trouble. Among them was Marks himself, giving the lead to the Wallace once more.

The yellow was extended as NASCAR worked on an oil slick that may have contributed to the restart chaos.

Racing resumed with 14 laps remaining. Wallace got into the muddy grass and was promptly followed by the second-place running Allgaier. The Roush-Fenway driver maintained his advantage, but he ran into trouble again.

That allowed Dillon to move past, but his lead was far from comfortable. Marks continuously  hounded him for the top spot until Dillon ran off the track as well. With less than ten to go, Marks checked out and built up a 20+ second lead until the yellow flag was displayed for the eighth time.

This set-up a two-lap shootout. Hornish tried his best to keep up with Marks with conditions worse than any other time during the race, but it was to no avail. In his 25th Xfinity Series start, the experienced road racer was able to capture his first victory for Chip Ganassi Racing.

Hornish finished second, 3.7 seconds back. Behind him it was Blaney, Dillon, Allgaier, Jones, Lally, Gaughan, Sadler and Poole.

Also of note was Alon Day, who drove the No. 40 for Carl Long in his NXS debut. He made history as NASCAR's first Israeli driver and was running as high as third at one point, bringing home a 13th-place result.

In the championship standings, Sadler holds a 15 point lead over Suarez. At the backend of the Chase grid, Blake Koch holds onto the final spot, just three points clear of Ross Chastain.