Brad Keselowski turned a 30.871 second lap at Nashville Superspeedway in his No. 22 Penske Racing Dodge on Saturday to claim the pole for the Federated Auto Parts 300 NASCAR Nationwide Series race.

“I’ll have to go back and look at the tracker,” Keselowski said after being informed that he was on the pole. “I didn’t think it was all that great.” 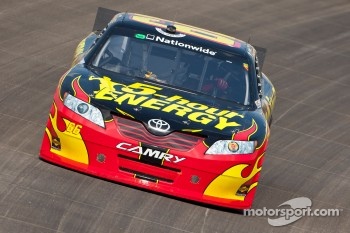 “We weren’t that good in practice and made a lot of changes,” Wallace said.

The top-five qualifiers all posted qualifying laps of under 31 seconds. Austin Dillon was fourth fastest in the No. 33 Kevin Harvick Inc. Chevrolet with a time of 30.947 seconds. Dillon’s KHI teammate, Elliott Sadler in the No. 2 Chevrolet, was fifth fastest with a lap time of 30.992 seconds.

“This is only my second time here,” Sadler said. “I learned a lot my first time here (in April).”

Forty-four cars attempted to qualify for the forty-three spots available on the starting grid. The one odd man out after qualifying was Brett Rowe. Rowe had to wait through the entire qualifying session to officially learn his fate. Dillon was the fastest go-or-go-home car in practice, so he was the final car to go out in qualifying. 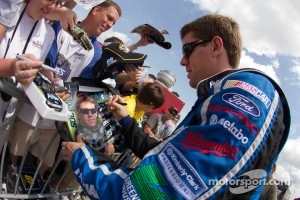 Rookie Timmy Hill, in the No. 15 Rick Ware Racing Ford, was the 17th car out during the qualifying session and held the provisional pole after posting a lap time of 31.611 seconds. He was eventually knocked off the pole by Scott Wimmer in the No. 87 Nemco Motorsports Toyota. Wimmer set a time of 31.417 seconds. By the end of qualifying, both drivers were shuffled out of the top-10, and Hill out of the top-20, with Wimmer 14th and Hill 22nd.

Hill credited his time at the top of the scoring pylon to experience.

“To come back a second time, there’s a whole lot of confidence,” he said.

According to Hill, he could concentrate more on making the car better than making laps on his second visit to Nashville.

As speeds picked up later in the qualifying session, Brian Scott took the provisional pole for a time in the No. 11 Joe Gibbs Racing Toyota with a time of 31.139 seconds. He eventually lost the pole to Trevor Bayne in the No. 16 Roush Fenway Racing Ford when Bayne turned a lap at 31.065 seconds. By the end of qualifying, Scott was shuffled back to 10th and Bayne seventh.

After falling out of line to replace a right rear deckling pin, Wallace claimed the provisional pole and maintained the position until losing the top spot to Keselowski.