Keselowski earns his and Penske's first title in Texas 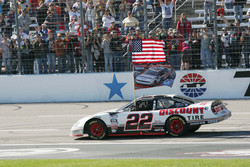 Even though he did not win Saturday's race, a third-place finish was good enough to lock up the championship before the season ending Ford 300 that occurs in two weeks at Homestead-Miami Speedway in Florida.

This also marks the first NASCAR title for both Keselowski and for team owner Roger Penske. No Penske driver has earned a championship in any NASCAR series in the history of the Penske organization. By finishing third Saturday, Keselowski has now finished in the top-10 at Texas Motor Speedway in the last nine Nationwide races held at the 1.5-mile oval.

Taking evasive action, Keselowski took his car though the infield grass at to avoid hitting the spinning Kennedy. Keselowski did have damage to the the front end of the Dodge Charger but the No. 22 crew was able to make repairs before qualifying later that afternoon.

The qualifying lap for the #22 Discount Tire Dodge placed Keselowski 22nd on the starting grid in his quest to lock up the championship.

"I thought the Discount Tire Dodge would be a touch faster. The guys did a great job fixing the front-end damage that we got earlier in practice." In the end, the starting spot would prove to be good enough to help Keselowski finish 3rd and wrap up the championship title.

"This is an awesome team that just fights real hard," Keselowski said. "We wanted to win the race, it just didn't go in our favor. I'm proud of the effort all season long. Everyone at the shop gets us to the races and gives us the fast racecars that we need to win races and a championship. It's very special," added the new Nationwide champion. 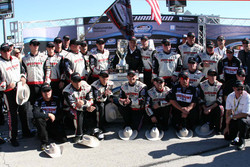 Keselowski reflected on giving Roger Penske his first NASCAR championship. "It's pretty awesome. He's the Captain. I'm not sure how many (overall) wins that he has. I can't think of anybody that has more. This one was awesome and it's incredible that we were able to get him a championship."

With Dodge earning their first NASCAR Nationwide Series championship, Keselowski stated, "My family has a lot of history with Dodge in the Truck Series and it's like I grew up with the brand.

"Dodge made a huge commitment to the Nationwide Series this year with the Charger and Challenger and to be able to give Ralph (Giles, President and CEO of Dodge) and all the employees back in Auburn Hills (Mich.) the championships is really cool.

"All their support has made a huge difference this season. I got to drive really fast and cool Dodge Chargers and Challengers this year and to give them a championship is really special."

Roger Penske is a legend at the Indianapolis Motor Speedway in Indy Cars but has been shut out for 27 years in earning a NASCAR title. "At the end of the day, when you think about not being in the winner's circle at Indy and not winning that championship, this is right up there with it.

"Brad has done an outstanding job," said Penske. "All of the guys from the top to bottom have been so good and so committed. To have the reliability and durability of the car and a drive that stays out of trouble, now we know that he's a great race car driver. He drove Kyle Busch really clean today and you see what happened. It was a great finish." 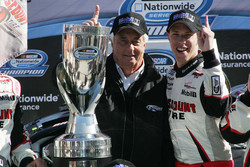 Penske remarked where the championship ranked in all of his motorsports achievements. "We've been in NASCAR a long, long time. To me, it's like winning the Indy 500 for the first time. What can you say; it's a team sport and a team effort. To me, that's what we came here for. Paul Wolfe, the whole group, they worked their heart out and we got the results."

"Brad not only won the championship, but drove the dodge Challenger to victory in two of the four new car races. The countless hours spent maximizing the performance of the Dodge Charger and Dodge Challenger for competition has produced the ultimate reward-the NASCAR Nationwide Series Championship.

"We're extremely proud of our partnership with the entire team at Penske Racing," Gilles said. "The competition this year has been intense, making this championship even more satisfying. This is the perfect end to an amazing season."

Keselowski has finished in the top ten in 27 of the 33 races ran thus far this season. He earned $37,450 for finishing third in the O'Reilly Auto Parts Challenge and has earned a total of $1,109,520 already with two more events to be contested. Keselowski lead lap 140 in Saturday's race in route to winning the 2010 NASCAR Nationwide Series Championship.