After a weekend off, the NASCAR Nationwide Series heads to Michigan International Speedway for Saturday’s Alliance Truck Parts 250. MIS is a playground of sorts for the series' reigning champion Brad Keselowski for at least a couple of reasons. “Michigan is a very special place for me, and not just because I have won on it in the past, but obviously because it is my home track,” he said.

... you dream about having cars that drive like that one did.

After a 30th-place showing in the most recent Nationwide event -- the STP 300 at Chicagoland Speedway on June 4 -- Penske Racing's driver Keselowski heads home this weekend, hoping to get his NNS season back on track and what better place to do that than in his home state?

“We definitely need a win in 2011, and I can’t think of a better track to pick one up than Michigan,” Keselowski said.

The Rochester Hills native has won the two most recent Nationwide races at Michigan, so a win on Saturday wouldn’t be at all surprising. With the win, it would put Keselowski in a club with Tony Stewart and Kyle Busch as the only drivers to win at least three-consecutive Nationwide events at a given track in the last three seasons. Stewart has four straight wins at Daytona International Raceway, and Busch has three-straight at Auto Club Speedway in Fontana, Calif. 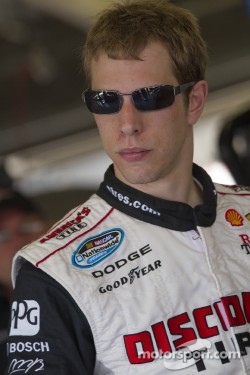 A win this Saturday on the 2-mile oval would also make Keselowski a Nationwide Series race at Michigan record holder. He heads into the weekend tied with Mark Martin, Ryan Newman, Dale Earnhardt Jr. and Todd Bodine as drivers with the most series wins at MIS, each with two. A third win would make Keselowski the only driver with more than two Nationwide wins at the track.

“It felt really good to dominate the way we did at Michigan last year with the new Discount Tire Dodge Challenger,” Keselowski said. “As a driver you dream about having cars that drive like that one did. That helped validate the win from 2009, because I heard a lot about the race being given to me.”

His two wins aside, other statistics show that Keselowski stands a good chance of claiming his first Nationwide Series win of the season with this weekend‘s trip to his home state. In four previous series starts at MIS, Keselowski has an average finish of 6.5. That average makes him one of only six active Nationwide drivers with an average Michigan finish inside the top-10. Keselowski may have company inside the top-10 when it comes to average MIS finishes, but he is tops when it comes to driver ratings among those on the entry list for the race on Saturday. His driver rating for Nationwide Series racing at Michigan heading into this weekend is 109.2.

The green flag is expected to wave on the Alliance Truck Parts 250 at approximately 3:30 p.m. ET Saturday. Live television coverage is scheduled for a 3 p.m. ET start on ABC. The race can also be heard live on MRN and Sirius XM channel 90.