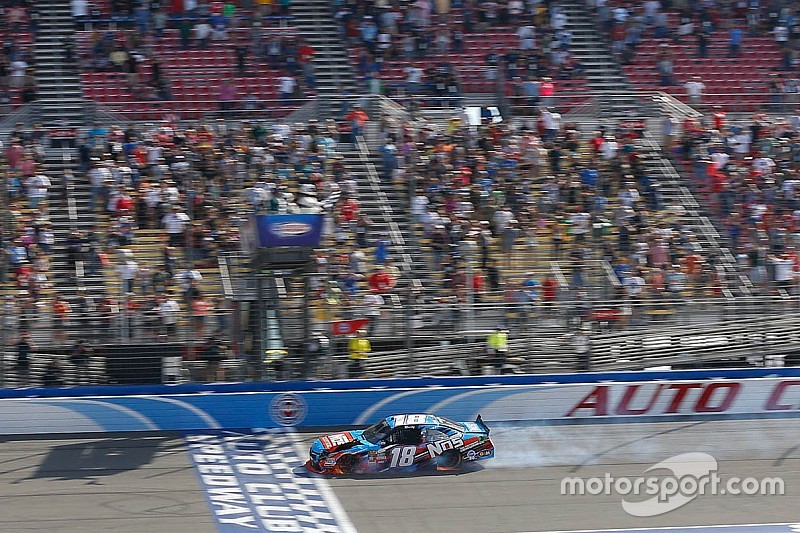 A NASCAR spokesman confirmed to Motorsport.com on Saturday night the sanctioning body would be reviewing Busch’s post-race actions and comments.

Busch was leading when he took the white flag in Saturday’s race but his left-front tire blew out as he entered Turn 1, which tore apart his fender and left debris on the track.

NASCAR did not throw a caution and Busch continued to race on but was eventually passed by Austin Dillon, who claimed the victory.

Busch was upset with NASCAR’s decision not to throw a caution – which could have locked Busch in as the winner if the field was frozen – but he still managed to finish second. However, he failed to fulfill any of his post-race media obligations, either on pit road or in the media center, after the race.

Drivers can be penalized for not fulfilling required media obligations.

NASCAR is also reviewing Busch’s comments after the race over his team radio, a portion of which were played on the TV broadcast by Fox Sports.

At one point, Busch says, “Debris all over the race track and they don’t throw a yellow. I’m just so pleased with you NASCAR. Thanks. Y’all are awesome. Fixing races. How about ….”

There were a couple of other words uttered that were not audible on the broadcast.

NASCAR’s code of conduct, which was updated in February, calls for fines of between $10,000 and $50,000 and/or probation for comments that disparage the sport and/or NASCAR’s leadership.

An accusation of “fixing races” could certainly fall under that category.