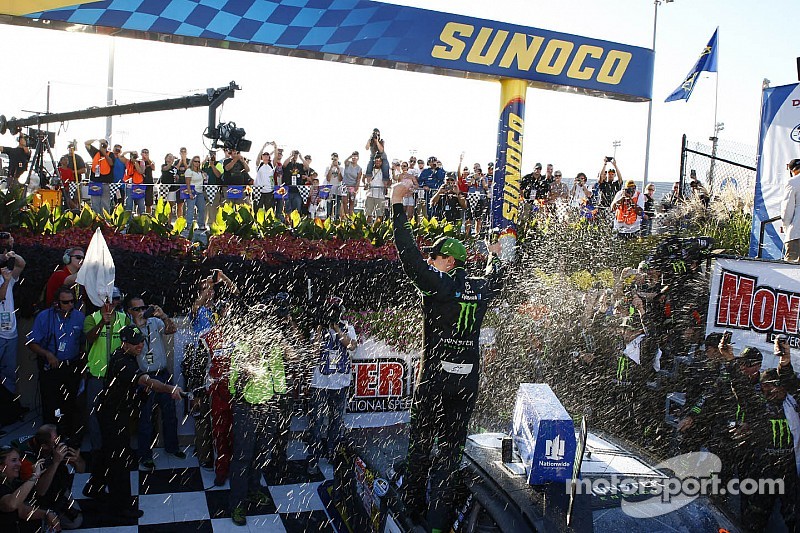 Busch got to the finish line 2.545 seconds ahead of Joey Logano

Kyle Busch took the lead from Joey Logano on pit road under caution near the midpoint of a NASCAR Nationwide Series race at Dover International Speedway and led every lap thereafter.

In winning Saturday’s Dover 200 at the Monster Mille, Busch duplicated an accomplishment remarkably similar to his victory at Dover in May.

In this case, he grabbed the lead from Logano with a lightning fast pit on Lap 100 and stayed out front for the final 101 circuits in winning his fifth Nationwide Series race of the season, his fifth at Dover and the 68th of his career, adding one to his series record.

This Monster Energy Toyota Camry was really, really fast. It was awesome.

Busch got to the finish line 2.545 seconds ahead of Logano, who ran second. Chase Elliott finished third and increased his series lead to 26 points over JR Motorsports teammate Regan Smith, who came home eighth.

Busch swept the NNS season at the high-banked concrete track with an effort that mirrored his victory on May 31, when he passed Logano on pit road on Lap 77 and led the rest of the way.

“I knew we had a good car,” Busch said. “I was just kind of biding my time—I was just chillin.’… The second half of the race, when we beat the 22 (Logano) off pit road—these guys here, they did a great job on that pit stop.

“It was good for us to get out front like that, get in clean air and show what this car had for speed. This Monster Energy Toyota Camry was really, really fast. It was awesome.”

Busch accomplished on pit road what had proven difficult on the race track, namely passing comparable cars in traffic.

“So you just kind of bide your time, pick at it and see what you can learn to make yourself better for tomorrow (Sunday’s AAA 400 NASCAR Sprint Cup Series race).”

In the second half of the race, after he fell behind Busch, Logano’s car developed a push, preventing him from racing for the lead.

“We got beat there off pit road, and after that, he was able to check out,” said Logano, who led 95 of the first 99 laps. “We started very fast just like the spring race also, so it was kind of a replay all over again.

“We’ve got to figure out what to do in the second half, it seems like.”

Elliott sustained damage from a wreck involving Kevin Swindell and Tanner Berryhill and dropped to 24th for a restart on Lap 47. But Elliott was able to cut through traffic and was running fifth before a Lap 96 caution for fluid on the track set the stage for the decisive pit stops.

“I’m proud and frustrated at the same time,” Elliott said. “I feel like we had a super-fast car, really from the get-go, and we were kind of biding our time in that first run. I made a mistake. I followed those guys (Swindell and Berryhill) way too close. It was completely my fault.

“I drove ourselves into a wreck and got behind and could never get back up to the front.”

Patience pays off for Corey Lajoie