HUNTERSVILLE, N.C. (April 19, 2011) – After last week’s improbable victory in the Aaron’s 312 NASCAR Nationwide Series race at Talladega (Ala.) Superspeedway, Kyle Busch finds himself just two Nationwide wins away from tying the legendary Mark Martin for the lead in career wins in NASCAR’s second-highest division as the series heads to Nashville (Tenn.) Superspeedway for Saturday’s Nashville 300. 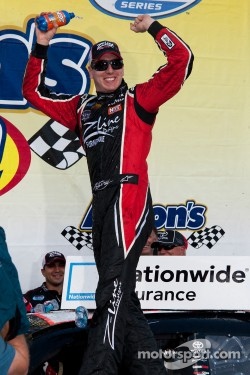 Martin has 49 Nationwide Series victories in his illustrious career, but Busch, driver of the No. 18 Z-Line Designs Toyota Camry for Joe Gibbs Racing (JGR), inched closer last week with a wild win that put his total at 47 trips to victory lane.

The fact Busch was even running at the end of last Saturday’s race at Talladega was a shock, for it appeared that his day was over after being involved in a multi-car accident on lap 89. His No. 18 Z-Line Designs Toyota was a mangled mess, so much so that he was ready to take his car to the garage so his crew could load it up and get a head start on the trip home.

But crew chief Jason Ratcliff had other ideas. The veteran race-caller brought Busch to pit road, where a swarm of JGR crewmen went to work on repairing the Z-Line Designs Camry. Quick and tenacious effort during a series of stops allowed Busch to rejoin the field without losing a lap. And, with 32 laps remaining in a car seemingly held together with duct tape and sheer will, Busch rallied his way to the front with JGR teammate Joey Logano pushing him from behind.

With a shove from Logano on the last lap, Busch took the lead down the backstretch of the 2.66-mile oval and kept it in the right place at the right time when a melee erupted behind him that sent Mike Wallace’s car airborne. With NASCAR having already attempted two green-white-checkered finishes, this caution provided the third and final strike. The race ended under caution with the field frozen just before entering turns three and four. Busch was clearly the leader when the caution flag waved, and after leading only three laps on three separate occasions – all before lap 36 – Busch was the leader on the lap that mattered most, allowing him to secure his fourth Nationwide win of the season and his second Nationwide win in a restrictor-plate race.

Busch not only moved closer to Martin, but also crossed another track off his Nationwide Series win list. There are 23 tracks throughout North America that will host a Nationwide race during the 2011 season. After scoring his first series victory at Talladega, Busch now has won at all but six of them.

Busch has never competed at one of those other six tracks – Road America in Elkhart Lake, Wis. – and is not scheduled to do so this season. And he only ran the Circuit Gilles Villeneuve road course in Montreal once, when he finished 10th in 2009. That leaves Las Vegas Motor Speedway, Darlington (S.C.) Raceway, the road course at Watkins Glen (N.Y.) International and Atlanta Motor Speedway as circuits he has competed at more than once yet not scored a Nationwide Series victory.

This week at Nashville, Busch will look to score his second Nationwide win at the 1.33-mile oval, as he took the checkered flag there in June 2009. Ratcliff was on top of the No. 18 pit box that night and would love nothing more than to gain a second win at a circuit he considers a “home” track.

After nine years working in various forms of racing around Texas, Ratcliff’s breakthrough came in 1995, when he joined Sadler Racing in Nashville, Tenn., as a mechanic and rear tire changer for drivers Chuck Bown and Gary Bradberry in the Nationwide Series.

After two years with Sadler Racing, Ratcliff left the team and spent the 1997 and 1998 seasons at LAR Motorsports, headquartered in Columbia, Tenn., where he was chief mechanic for Casey Atwood and Jeff Purvis over the two-year span. Ratcliff left Tennessee following the 1998 season and spent 1999 to 2004 at Kentucky-based Brewco Motorsports, serving as a crew chief for Atwood, Jamie McMurray and David Green. He then moved to North Carolina and began his career with JGR.

Despite having left more than 10 years ago, Ratcliff has several ties to the Nashville area as his parents and his sister live there.

And he’d love nothing more than to get a victory in front of family and friends, while helping his driver and friend inch closer to a record.

All in all, the Mark Martin record – it’s two away, it’s three away from being my own.

You are now two races away from tying Mark Martin for the career lead in Nationwide Series victories. What does that mean for you?

“All in all, the Mark Martin record – it’s two away, it’s three away from being my own. When and where that happens, we’re not going to pick a date. It’s too hard to do that. We have Darlington coming up, we’ve got Dover, and we’re not going to do Richmond. There’s definitely some good opportunity here to win three more races before June, or right into June. If everything goes right, then maybe we could do that. If it comes through this year, great. If not, then we’ll just wait and try to do it next year.”

What are your overall thoughts heading into Saturday’s NASCAR Nationwide Series race at Nashville Superspeedway?

“The racetrack is real finicky. It’s a fun place. It’s a mile-and-a-third, and yet it almost feels more like a short track. You’ve got really long straightaways, really fast speeds and you get down in the corner and you have to use a lot of brake, but yet there’s a lot of grip because of the concrete surface and the tire that Goodyear brings there. So, with the trucks and the Nationwide cars being there on the same weekend, I like it because it gives you a little bit. It’s kind of like a Nationwide-Cup weekend, I guess. You get a little bit more track time and that kind of gives you maybe a little bit of an advantage. I enjoy the back-and-forth stuff. And Nashville, being a standalone, non-Cup weekend, seems to be a little bit more relaxing and a little bit easier. I’m looking forward to going to Nashville.”

This week’s race at Nashville will mark the first time for the new-style Nationwide Series car on a concrete track. Any concerns heading into Saturday’s race?

“Every track we go to with this new car, it’s a challenge. Once we get to every track one time and get a feel for what we need with springs and the splitter, I’m hoping it will be easier the second time around. The first time you go to a new track with this new car, it’s a real challenge. And it’s because of the splitter. With the valence last year, you didn’t want to be off, but if you were off when you unloaded, the valence was very forgiving. The splitter is not. You really have to do your homework. Nashville is unique and it’s going to be unlike any track we’ve been to this year. So, it’s going to be a challenge. I think our guys have done a great job, thus far, predicting where we need to be when we get off the truck. We’ve always run well at Nashville as a company and, hopefully, we can continue that this week.”

The first time you go to a new track with this new car, it’s a real challenge.

You worked in the Nashville area during the mid-1990s as your professional racing career began. Do you enjoy going back to the area?

“I love Nashville. My parents live in Nashville. They lived in Copell, Texas, and my dad had a business in Irving, Texas. He sold his business. They built a home in Nashville. They’re originally from Alabama, so Nashville is pretty close to where they grew up. I have a lot of family and friends who live there. My sister also lives there. My wife and I lived there for several years and I got my start in NASCAR racing with a team in Nashville. I started off at Sadler Brothers Racing and then went to LAR Motorsports in Columbia, Tenn. It’s fun to go back to Nashville. It’s kind of like going to Texas in that I have a lot of family and friends there. Anytime you go to races like that, the weekend has a little different feel to it. It’s more incentive to do well and we’ve had this one circled on our calendar for a while, now.”

Last week at Talladega, the No. 18 Z-Line Designs Toyota was involved in a multi-car accident and was heavily damaged. Yet, Kyle still managed to win the race. Are you still amazed by that victory?

“It’s crazy – out of all the racetracks you go to, Talladega and Daytona – you spend so much time getting the bodies right, straight and then you look at our car from last Saturday and you can’t believe it could even run minimum speed. It was a great job by the guys on pit road. We came in there, three corners were knocked off of it, the crush panels were falling out of it – it was a mess. They did a great job of orchestrating the repairs to keep from losing a lap. Like Kyle said, you have to have a teammate and, thankfully, Joey (Logano) was committed there at the end to stand behind us and push us. He felt comfortable there and that’s the only way we were going to win it. Thanks to those guys and the 20 team for their hard work. If they didn’t have a fast racecar, then we wouldn’t have won it, either. It was a total team effort. It’s the ugliest racecar we’ve ever had in victory lane. To think you could do it at a restrictor-plate race – maybe it’s a new-car thing. Maybe we need to come down pit road next time on the first stop and knock all the fenders off of it and be done with it.”

Kyle is now two races away from tying Mark Martin for the career lead in Nationwide Series victories. What does that mean for you?

Austin Cindric after Dover win: ‘I love this race track’

NASCAR: Next Gen cost savings won't be apparent in 2022