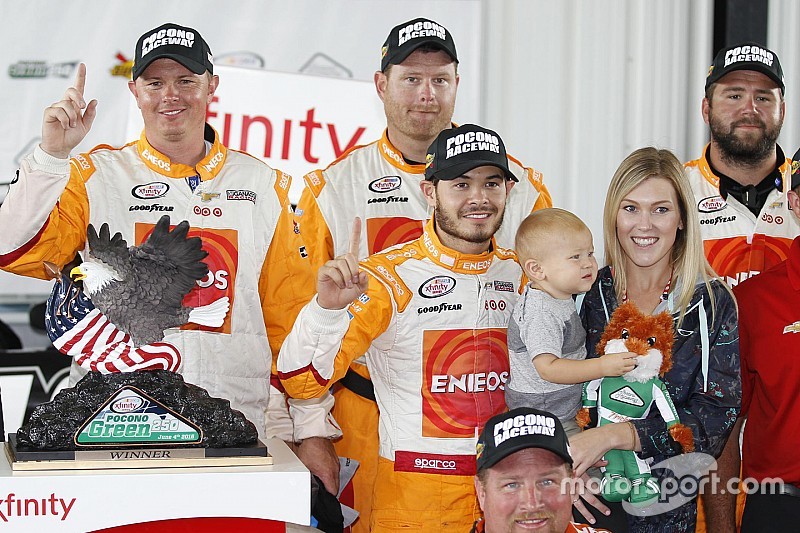 Kyle Larson held off the field of the Pocono Green 250 — but he couldn’t hold off Mother Nature in the Xfinity Series debut at Pocono Raceway.

Kyle Larson held off the field of the Pocono Green 250 — but he couldn’t hold off Mother Nature in the Xfinity Series debut at Pocono Raceway.

Larson, who started fourth, led 25 laps in the No. 42 Cessna Chevrolet as the fifth caution of the day fell for rain on Lap 51. NASCAR called the race following a one hour and 35 minute rain delay before Larson scored his fourth career Xfinity win.

“It’s raining,” Larson reported to the team just before halfway on Lap 50. NASCAR halted the race on the following lap.

"Now that this race is official, I’d like the rain to go away so we can get the Cup race in for tomorrow,” Larson said. “But thanks to everybody on this team for all the hard work they do. The cars are getting faster and faster and we’re getting closer to the (Joe) Gibbs (Racing) cars each and every week.

“Having a good time. The Cup car has been good too, so it’s been a lot of fun. I’d like to get another win tomorrow or Monday."

“We had a great Chevy and a good strategy,” Dillon said. “We put ourselves in a position to win the race and that’s all you can hope for. I think everybody kind of realized we were starting to battle the weather about 20 to 30 laps into the race. We had ourselves in a good position. I felt like we were definitely a top-five race car. At one point, I felt we were running down Kyle right before that second to the last caution came out. I thought that was our opportunity to get to him if it would have stayed green a little longer, we might have had the opportunity to take the lead and be where he is now.”

After the race was slowed for the first time by a competition caution, the second yellow waved on Lap 21 when Justin Allgaier wrecked in Turn 2. The only other accident occurred on Lap 38 when Ryan Reed became loose in Turn 1. The No. 16 Ford bounced off of the wall and into Jeremy Clements.

Reed, who started 23rd, felt doomed from the start when his radio malfunctioned before the race and fellow competitors traded paint with the Roush Fenway racer in the first 25 laps.

“I could hear the spotter but couldn’t communicate with that,” Reed said. “We fire off and were on the splitter really hard so balance wasn’t very good. We were getting it better, using hand signals, and then we got racing with the 39 car and he got on our door and we got loose. I think when we got into him it got the right rear tire and eventually it went down. We had a little tire smoke but it went away and I thought it cleared up.

We were racing with the 62 and he got inside of us and I thought it took the air off and we went into one and the tire let go and here we are.”

Clements was clearly frustrated with Reed following the race. He was scored 31st.

“He just came across me,” Clements said. “I don’t know what I could have done different…I hate it, that was our best car.”

Sieg and Reed have an altercation in the garage

"You can't race the kid, he's got a lot of money and he's got a Roush car, but he can't drive it,” said Sieg, who finished 29th. “Just an idiot. Everywhere he goes, it seems like he's always in a wreck.
"Money can't buy skill obviously with him.”

The two drivers had another coming together just last weekend at Charlotte when Sieg was running in the top 10 and Reed was two laps down..

Read more about what they had to say below: