No. 43 Team to use Chicagoland test to their advantage heading into weekend

CONCORD, N.C. (August 27, 2013) - The NASCAR Nationwide Series (NNS) heads from one night race to another, but this time instead of a high-banked, short-track, the drivers will endure the fast speeds of the high-banked, mile-and-a-half track at Atlanta (Ga.) Motor Speedway. 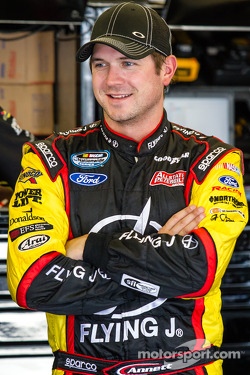 Annett has four starts at the mile-and-a-half track, earning one top-10 finish last year. In those four starts, his average finish is 16.2, his best start of 14th and his best finish of 10th both came in last year's race.

The two-year old NNS team at Richard Petty Motorsports followed its NASCAR Sprint Cup teammates to Chicagoland Speedway this week to test at another mile-and-a-half track, Chicagoland Speedway. While the turns at the Illinois track have less banking, the teams will be able to use some of the information from the test to help them going into this weekend's race.

"I'm looking forward to Atlanta, we got a top-10 there last year, and we'll look to top that this year. We had a top-five car last weekend but we just couldn't get our lap back. We still finished just outside of the top-10. We were also able to test this week at another mile-and-a-half track, so that should help us a good bit. We didn't do as well as we wanted to at Chicago earlier this year, but we were able to get a lot of information from the test. Not only will it help us when we go back, but it will help us on the other mile-and-a-half tracks like this weekend at Atlanta."

"I think everyone from the driver to the Crew Chief enjoys going to Atlanta. It's another one of those tracks that have character. The tires fall off very quickly there, which allows for multiple racing grooves. Your car doesn't have to be perfect all the time at Atlanta, and if the speed falls off in one part of the track, you just go to another groove.

"We'll need to make sure that our car is good on the long runs this weekend. Since it's a night race, it will help that our practices are later in the day, so we can see how the car will perform closer to the time that the race will actually be taking place, rather than in the morning or the afternoon when the sun is out full force."