“This has been my favorite track since I started here”

Mooresville, NC (September 30, 2013) The No. 22 Ford powered by Roush Yates Engines struck again as Joey Logano drove it to its 11th victory of the season in the NASCAR Nationwide Series. 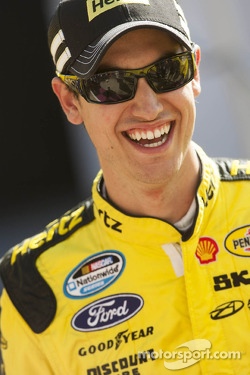 Logano started the weekend off strong by grabbing the top starting position for Saturday’s 5-Hour Energy 200 at Dover International Speedway. With a qualifying lap of 155.172 mph, he claimed his 23rd career pole in the Nationwide series and his third pole at Dover. Penske Racing teammate and championship points’ leader Sam Hornish qualified second to make up an all Ford front row.

Logano pulled away early to become the first driver to win four straight races at Dover in NASCAR’s second-tier series. He led 106 of the 200 laps and was never seriously challenged for the lead in a race determined by long runs and green flag pit stops. “This has been my favorite track since I started here,” said Logano. “There were a lot of streaks to be kept alive today and we managed to pull that off.”

Four drivers have won 11 times in the No. 22 Ford Mustang this season, all with crew chief Jeremy Bullins. Overall Ford has won 13 Nationwide Series races in 2013 and is only three shy of the all-time record of 16 wins (set in 2002).

“We had a fast race car. This Hertz Ford was really good when we unloaded and then throughout practice the track changed on us a little bit but we made some good changes,” said Logano. “After that second green-flag pit stop it was dialed in pretty good. I was just able to run my race and take care of the tires, make sure I was doing the right things in the car, and get another victory. It’s just really cool to get four in a row here at Dover.”

Saturday’s win at the GRAND-AM Championship Weekend presented by BMW marked the 10th career victory for Roush Jr. and 15th career victory for Johnson. The duo won the season opening race at Daytona International Speedway earlier this year. “It was a real big deal to get this victory,” said Roush. “It’s been a rather tough year and we have had a lot of bad luck. It feels good to end the season as a winner.”

“Lime Rock has always been a special place for me, but I’ve never had great luck here,” said Johnson. “It all worked out to come down to the last lap or two. Bell raced me hard – but clean – and we were able to make a move around to the outside and hold him.” Gregg Satterlee raced to a $10,000 victory at Hagerstown Speedway in the Super Late Model series. The season-ending event was originally postponed nearly a year ago due to Hurricane Sandy and then moved three more times due to bad weather. Satterlee took the lead on lap 16 of the 50 lap race and motored through lapped cars, leaving only eight competitors on the lead lap. “We were looking to come here today and try to get this win,” said Satterlee. “The racetrack was pretty racy, even with hot-lap traffic. You could move high or low and I just had a really good car with great power and finally got one. We’ve been close all year here. The whole team worked hard to finally get to Victory Lane.”

Alex Bowman comes up short on fuel mileage at Dover