Logano returns to the No. 18 for the Nationwide race at The Glen 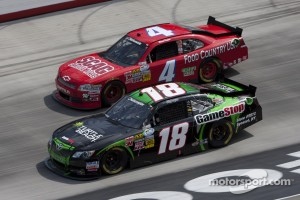 · BACK TO THE 18 THIS WEEKEND AT THE GLEN: While Joey Logano will be returning to the NASCAR Nationwide Series this weekend, he will also be returning to the wheel of the No. 18 with GameStop back on the car, while Ryan Truex will pilot the No. 20 this weekend at Watkins Glen International. Logano will try and help build the No 18 Joe Gibbs Racing team’s lead in the Nationwide Series Owner’s Championship point standings. The team holds a 19-point lead on the No. 2 Richard Childress Racing ride of Elliott Sadler and a 37-point lead on the No. 3 Richard Childress Racing car of Austin Dillon. Logano has been strong all year when he is behind the wheel of the No. 18. In fact, four of his five Nationwide Series victories this season have come while driving the No. 18 with crew chief Adam Stevens on the box. During his impressive streak of wins earlier this season, Logano had increased the No. 18’s lead in the point standings to nearly 70 points. Denny Hamlin, Truex, Mark Martin and Michael McDowell have all also spent time behind the No. 18 Joe Gibbs Racing Toyota this season.

· LEFT AND RIGHTS ARE ALRIGHT WITH LOGANO: While Joey hasn’t been considered a “road course ringer” in the past, his results in the Nationwide Series (and even in the Sprint Cup Series) might show something different. In the last couple of season, Logano has only competed in the Nationwide Series road course event at Watkins Glen (skipping the races at Montreal and Road America), but in those starts at Watkins Glen, Logano has scored three top-10 finishes in four starts including finishes of second and third in the last two seasons. Logano has competed in two Nationwide Series events at Montreal and finished sixth in one of them and was running third in the rain in the other before a massive accident took several of the top competitors out. Even in the Sprint Cup Series, Logano has turned into a road course ace, with three top-10 finishes in his last three Sprint Cup Series starts on road courses.

· SPENDING SOME TIME AT VICTORY JUNCTION: Logano will spend some time this week visiting the campers of Victory Junction Gang Camp in Randleman, NC as part of the camp’s annual NASCARnival celebrations. Logano will head to the camp with several members of his No. 20 Home Depot Racing crew on Tuesday and participate in the camp’s carnival night. Members of the No. 20 Home Depot team will perform a live pit stop and teach members of the camp to do the same. Logano will also participate in the number of other activities during the “pirate” themed event. Built in honor of Adam Petty, Victory Junction provides life-changing experiences for kids with chronic medical conditions and serious illnesses. Victory Junction has enriched the lives of more than 14,000 children and families since opening in 2004 and welcomed children from 50 states and four countries.

· STILL A NASCAR NATIONWIDE SERIES STAT KING: Despite running just a couple of Nationwide Series races in the last month, Logano is still one of the leaders when it comes to stats in the second-tier series this season. Logano has made 13 starts this season (his last coming at Indianapolis) and has earned five wins (the most of any driver this year), seven top-five finishes and 10 top 10s. Logano also has three poles, which is tied for the best in the series with two other drivers.

From the Cockpit:
Joey Logano Quotes: “I’m pretty pumped to get back to Watkins Glen. I always go into this race feeling like I have a shot to win and I don’t think it’s any different this year. The last two years at the track, we’ve finished second and third, so I think it’s about time I get that first road course win and I think it could happen. Adam and the guys have been working hard on the car, and we’ve got a really cool paint scheme thanks to GameStop, so I think this could be our time. We are going to go out there and go for it. We want to win. And we want to get the 18 car another great points day. I’ve been pretty fortunate this year and the 18 number has been good for me with four wins in that number so far. So if we can win the race, that would be awesome and it would help out in the Owner’s Championship, which is always very important to this Joe Gibbs Racing organization.

“Watkins Glen is a lot different from some of the other road courses that either the Cup or Nationwide Series visits because it is a lot faster. Some of the other tracks have more technical sections where Watkins Glen is a track where you carry a lot of speed through most of it. So it’s a nice mix of speed and technical moves. That makes it a lot of fun actually. You have to have speed built into your car, but you also have to have it handling and coming off the corners. If we can have a good run there and maybe even win the race, it will just bode well for Sunday afternoon. Track time on these road courses means a ton.”

From the Pit Box:
Adam Stevens Quotes: “This will be the first road course event for me and my team this year, so I’m really looking forward to it. We were decent there last year, but just a little off of the best cars that finished in front of us. We have worked hard on the setup to get something Joey can race with and Joey and I have talked about it quite a bit. Practice goes fast there so you have to unload close. There is not much time to sort through issues or make too many changes. Qualifying in the morning is interesting because the track has so much more grip when it’s cool. You have to completely change your braking points, which is a big adjustment for the drivers. There are usually quite a few Cup drivers in the field, and that makes the competition fierce at the front of the pack. This place rewards aggressive driving, which is right up Joey’s alley. Also, as a crew chief, you hope it stays dry, because you don’t want to be racing in the rain.”