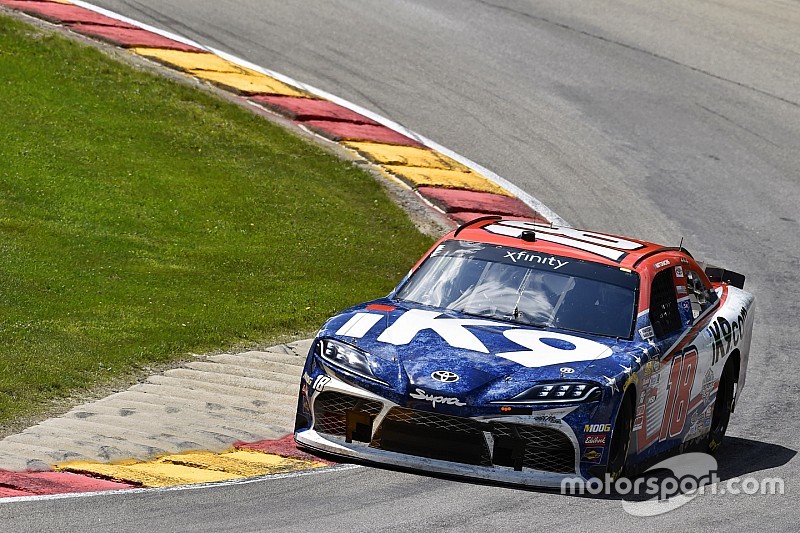 Matt DiBenedetto looked primed to pick up his first NASCAR victory this weekend but a ‘rookie mistake’ knocked him out of contention.

DiBenedetto got the opportunity to drive Joe Gibbs Racing’s No. 18 Toyota in Saturday’s Xfinity Series race at Road America and for much of the weekend he appeared ready to capitalize.

Instead, teammate Christopher Bell ended up with his first road course victory and DiBenedetto’s hopes for his first NASCAR national series win ended in the final turn of the final lap.

“Just being stupid on my part,” DiBenedetto said when asked what happened when he went off track in Turn 14. “I was looking at my mirror and got too high and just barely got up in the marbles and made the most rookie mistake of my life. It was dumb – uncalled for.

“We had the fastest car on the track and nothing to show for it. We lost some spots on pit road but you win and lose as a team. We were trying to play catch up after making too many mistakes.

“It was self-inflicted and ruined our day. I drove stupid. Won’t sleep all week. This isn’t exactly good for what I’m trying to do with my career.”

DiBennedetto ended up leading the most laps (18) of any driver in the 45-lap event but was credited with a 27th-place finish.

DiBenedetto had hoped to cash in on the opportunity to compete in one of the Xfinity Series’ tops teams on one of his favorite road courses.

He came to the race fresh off a career-best second-place finish in the Cup series at Bristol (Tenn.) Motor Speedway, just days after learning he would not be returning to Leavine Family Racing’s No. 95 Toyota next season.

He and Bell had been among the fastest cars all weekend.

“I’m really heartbroken for Matt DiBenedetto. He was obviously really, really fast,” Bell said after his win. “We knew in practice that both of our cars were really good and we were going to be right there racing with each other.

“I don’t really know what happened but I saw him go flying off (Turn) 14 so that sucks. He's in a tough spot right now and he needed a good run there.”

Christopher Bell's path to Xfinity championship is 'spot on'

Cindric, Gragson tangle early at Kansas; day over for No. 9

Briscoe after Kansas win: ‘I want to take this car to Phoenix’