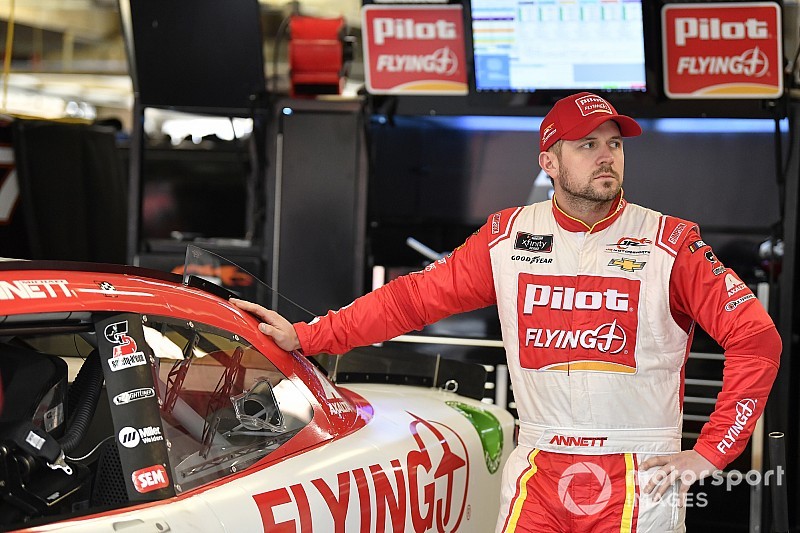 Michael Annett has been a driver for JR Motorsports since 2017 but until this season he hadn’t felt like a contributor.

In his first two seasons with JRM in the Xfinity Series, Annett watched as his teammates battled for the series championship while he struggled with one top-five finish in 66 races.

With the help of encouragement from team co-owner Dale Earnhardt Jr., a new crew chief and a reevaluation of his approach to the sport, Annett is off to his best season since 2012. That year, while driving for Richard Petty Motorsports, Annett finished fifth in the series standings.

Already this season, he won the season-opener at Daytona – Annett’s first series win – and hasn’t slowed down since, finishing 13th or better in the next five races.

Annett enters Saturday’s race at Bristol (Tenn.) Motor Speedway already locked in the playoffs and ranked fourth in the series standings. He’s also one of four drivers eligible for the $100,000 Dash4Cash bonus in the race.

Even more importantly, Annett believes he and his No. 1 Chevrolet team are making important contributions to the success of JRM in general.

“I think our notes are a little more important after practice for the other engineers now,” Annett said. “We always felt like we weren’t adding to the team with being a four-car team and not doing our part.

“It makes our notebook that much thicker as an organization and everybody is pulling from each car now rather than us pulling and asking a lot from the other teams.”

Annett’s new crew chief, Travis Mack, has been an integral part of the team’s success. JRM brought in Mack last July after he was released from Levine Family Racing. He had formally worked at both Hendrick Motorsports and JRM.

“Travis came in with like 10 races left last year. He kind of got his feet wet and a grasp of everything. With the excitement and confidence he brings, everyone was starting to buy in last year. It grew over the offseason,” Annett said.

“I am a very loyal person. When I sign up to start something with a group of people, I hate making changes. I want to try and make it work because everyone started with a goal. I hate making those changes but sometimes in our sport it is necessary.”

Annett said once you see the payoff from the changes, it just adds your already-growing confidence. “Nothing speaks louder than results,” he said.

Earnhardt is very familiar with Annett’s journey; he experienced much of it himself in his own NASCAR career.

“It really takes a lot of personal experiences, and it’s just a very difficult process and path to go through.”