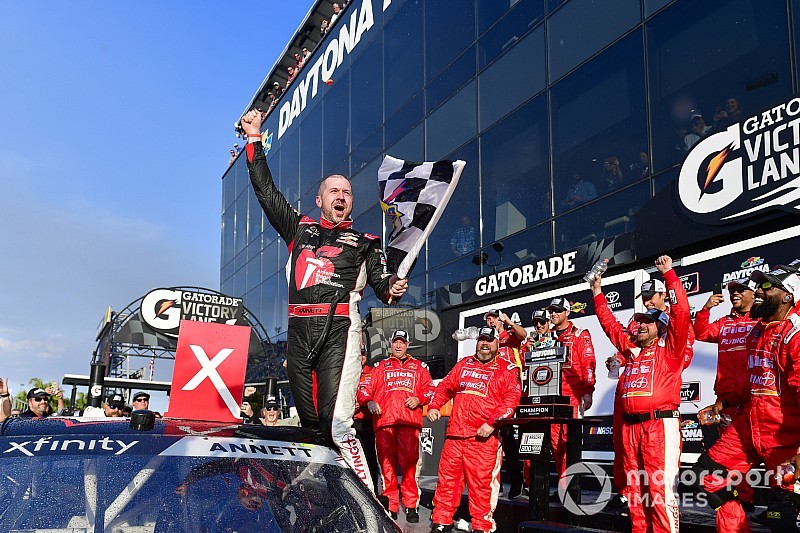 So far in Speedweeks, the Trucks and Xfinity Series openers have both featured first-time winner.

“This is amazing. My first words were ‘Eight years’ – it’s been eight years in this series,” Annett said in Victory Lane. “I can’t do it without these guys. They stuck with me when everybody would count us out. Some people wonder why I get to drive this car and I think we showed it today.

“Our slogan this year is ‘One team, one dream, one goal’ and this was one of them. So, we’re starting off good.”

Annett said his spotter, Jason Jarrett, helped guide him through the difficult final lap with Allgaier closing in.

“I was waiting for a second line to get formed. I know they tried but it just wasn’t there,” he said. “When it hadn’t formed with about three (laps) to go, I knew they weren’t going to have enough steam to get us.

On Lap 71 of 120, NASCAR was forced to throw a caution when one of the roof flaps from Brad Keselowski’s No. 12 Ford came off his car and ended up in the infield. Brad Keselowski took his car to the garage.

“I felt like I was back in the ‘50’s running a convertible here on the beach. That was interesting,” Keselowski said. “The roof, escape hatch, whatever it is called looks like there was a defect from the factory on the body and just nothing we could do.

“The guys tried to fix it but it is in a spot where you can’t get to it and work on it. It is made the way it is made. We are stuck.”

The race returned to green on Lap 76 with Annett taking over the race lead.

On Lap 80, Ray Black Jr. wrecked on the backstretch to bring out the caution. The race returned to green on Lap 83.

With 30 laps left, Annett continued to lead the way followed by Allgaier, Jones, Sieg and Cindric.

With 10 to go, Annett still held the top spot with Allgaier in tow.

Cindric was third, Chase Elliott was fourth and Jeffrey Earnhardt rounded out the top-five.

Following the break between Stages 1 and 2, Bell was the first off pit road followed by Earnhardt and Jones.

Cindric moved into the top spot at the start of Lap 39.

With 20 laps left in the stage, Jones got around Cindric to take the lead for the first time.

On Lap 43, Chastain made his way into the lead for the first time followed by Elliott and Jones.

With 10 to go in the stage, Chastain continued to lead the way followed by Jones and Cindric.

Justin Haley went low around Earnhardt in Turn 3 on the final lap to claim the Stage 1 win.

Chastain ended up third, Nemechek was third, Earnhardt ended up fourth and Jones completed the top-five. Until the pass, Earnhardt had led the first 29 laps.

Earnhardt jumped to the lead on the first lap and remained out front the first 10 laps. He had previously led nine laps in his entire NASCAR career up to this point.

Halfway through the first stage, Earnhardt remained in command, followed by Haley and Chastain.

NASCAR informed Keselowski’s team that during its next pit stop under caution it must work to secure his roof flap, which appeared to have come loose.

With 10 laps left in the first stage, Earnhardt continued to lead the way.

The following drivers had to start the race from the rear of the field – Cole Custer (engine change), Reddick and Tullman (tire change) and Jeremy Clements (unapproved adjustments).