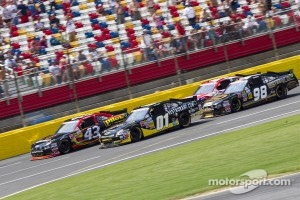 GAFFNEY, S.C. (May 27, 2012) – Mike Wallace and the No. 01 Restaurant.com Chevrolet team of JD Motorsports was finally rewarded with a much-deserved result for their endeavors in the NASCAR Nationwide Series at Charlotte Motor Speedway on Saturday.

After posting the 21st and 29th-fastest times during the two practice sessions, the Newt Moore-led team tweaked their set up just right for Wallace to qualify 19th for the 200-lap race. With buoyed spirits, the four-time NNS driver and team set their pace towards success right from the green flag.

When the first caution, of seven, waved on lap 15 they were running in 20th position with Wallace saying the car was pretty stable at this point. Speaking of the car, this was a new Chevrolet to the JD Motorsports stable having been purchased from the newly-announced NASCAR Hall of Fame driver – and Mike’s brother – Rusty Wallace.

Add that to the hard work in preparing the Restaurant.com car, and the team felt a good day was coming their way. When the caution waved on lap 55, Wallace was being shown in 20th place on the scoring pylon.

As the laps clicked off towards the checkers, a long stretch of green-flag racing forced teams to make non-caution flag stops. With some good pit calling by Moore, Wallace took the lead on lap 113 and held it for two circuits around the 1.5-mile, high-banked oval.

This was one of the 12 lead changes that took place during the race amongst the competitors. Now knowing they had a solid car that was reacting to adjustments on pits stops, Wallace keep his foot on the gas and remained a top-20 runner.

From the halfway point on, Wallace did his best to keep pace with the lead to get a good finish for the team and their owner, Johnny Davis.

Two more pit stops before the end allowed for more adjustments, fresh tires and fuel to keep them competitive. And, it worked out well for the No. 01 Restaurant.com team as Wallace crossed under the crossed checkers on the lead lap in 15th place.

As a reward for their best finish of the season, Wallace moved up one position to 12th in the Driver’s Points where he trails 11th by 22 markers. The next race for the NNS is Saturday, June 2 at Dover International Speedway.

Wallace’s teammate, Danny Efland in the No. 4 Tradebank.com/Doug Herbert Performance Parts Chevrolet, started 32nd for the race. Having the same high hopes as the No. 01 team, they were looking for a good day for the series’ home race.

However, brake problems plagued the team at lap 15 and forced them into the garage for repairs. They were able to return and make enough laps to finish in 38th place.

Mike Wallace Quotes: “It’s a pretty good feeling when you can go up against all these well-funded teams and stick with them on the lead lap. Newt (Moore, crew chief) and the team did a great job getting this car ready for Charlotte.

“The adjustments we made between the final practice and qualifying really helped us out and the results showed. The pit stops were at the right times and the calls kept us consistent throughout the race. It’s always nice to lead laps like we did there just before the halfway point, too.

“I’d like to thank Rusty (Wallace, brother) for the good car Johnny (Davis, owner) got from him. Speaking of Rusty - that was a pretty big deal with him being named to the next NASCAR Hall of Fame class last week. That’s an honor for him and our entire family.

“We’re off to Dover next week and we had some success there last year with a top-10 run. If we can string a few good runs in-a-row like this, it would really help us achieve the success we’ve been chasing lately.”